To God be the glory. The challenge was real and it was a great learning experience for me. The language barrier makes everything much more difficult especially so with this size production. The end result: Amazing!

I woke up just before 4am Thursday morning the 17th of August. I had some devotion time and coffee with God before riding in the dark to the property where there was already about a hundred men waiting. At 5am the selection began and the number outside the gate was closer to 200. After trying to pick guys through the gate and letting them force their way through the crowd, we opened the gates for all and finished the selection process of choosing and listing all names of the men while standing from the top of the house.

I agreed to 100 men then raised it to 110 and then remembered the day before when some cement was delivered and one of the men had his 14 year old son with him who asked me for a job. I had asked the boy, Boris, to get me a bag of cement, (weighing 100#). He ran across the yard grabbed a bag, threw it over his little shoulder and ran it back to me.  I then said to him to “please take it back.” And he did, so that made 111 plus the five ladies it took to cook for all of us, plus nine full time guys made it 125 total. Pastor Ludy led us in prayer then the ladies served us coffee and bread before work began at 8am. Brother Randy did some calculations for me via Instagram and came up with 50 yards of cement, that’s 5 cement truck loads all mixed by hand and bucketed up then dumped onto the floor. 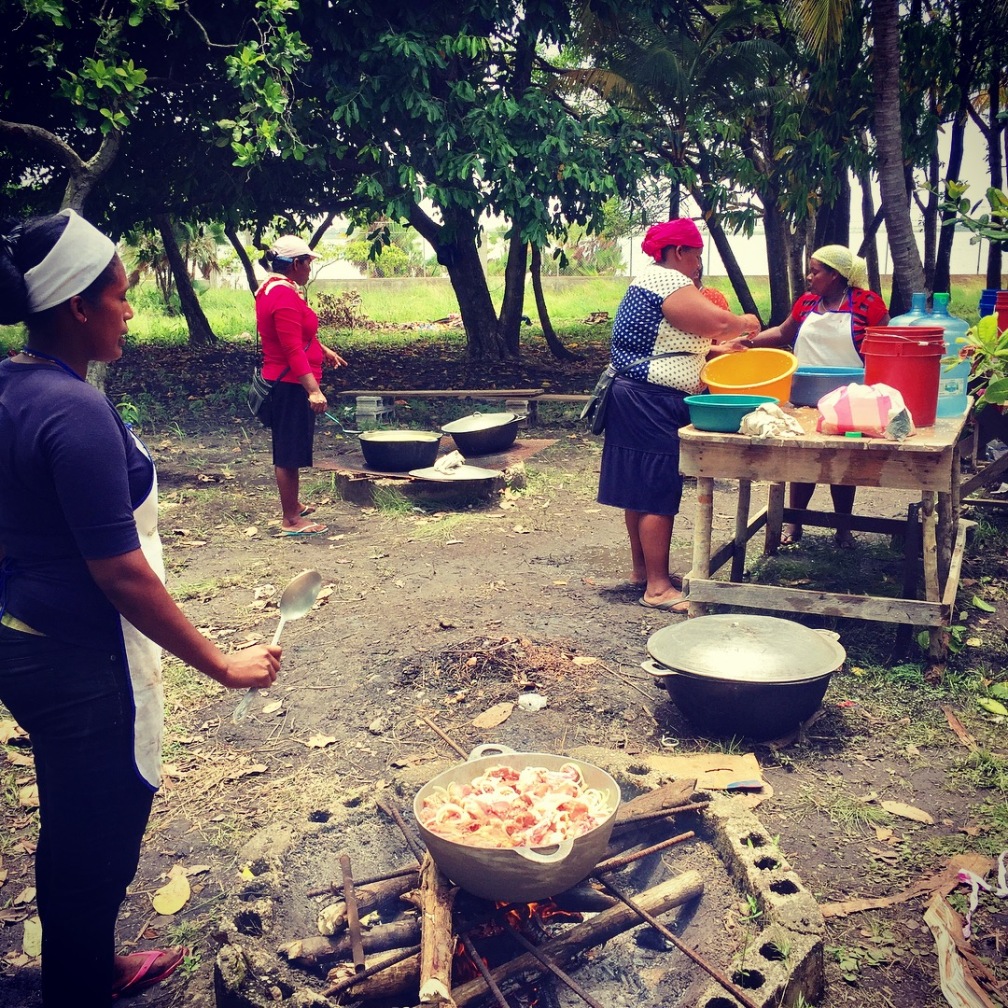 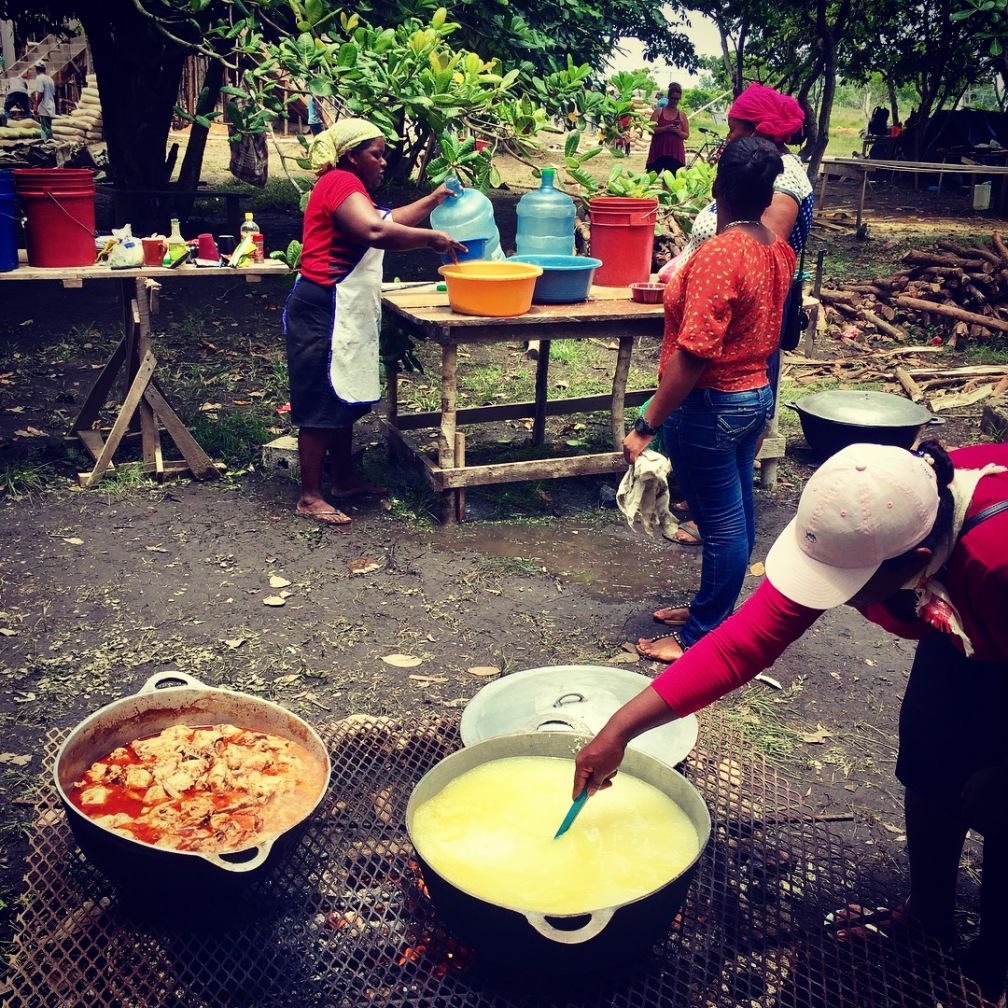 At noon we took turns of about 40 men eating at a time and began winding down at 3:30 or so when the cooks started to give out food again and the guys were somewhat out of steam. It was difficult to get men back to work to finish, the floor was very close to finished but the steps needed to be poured as well.  In hindsight I should have called it a day and paid all but about twenty and paid the twenty extra to finish the steps but as it was I kept everyone around until the job was completed, at about 7pm. 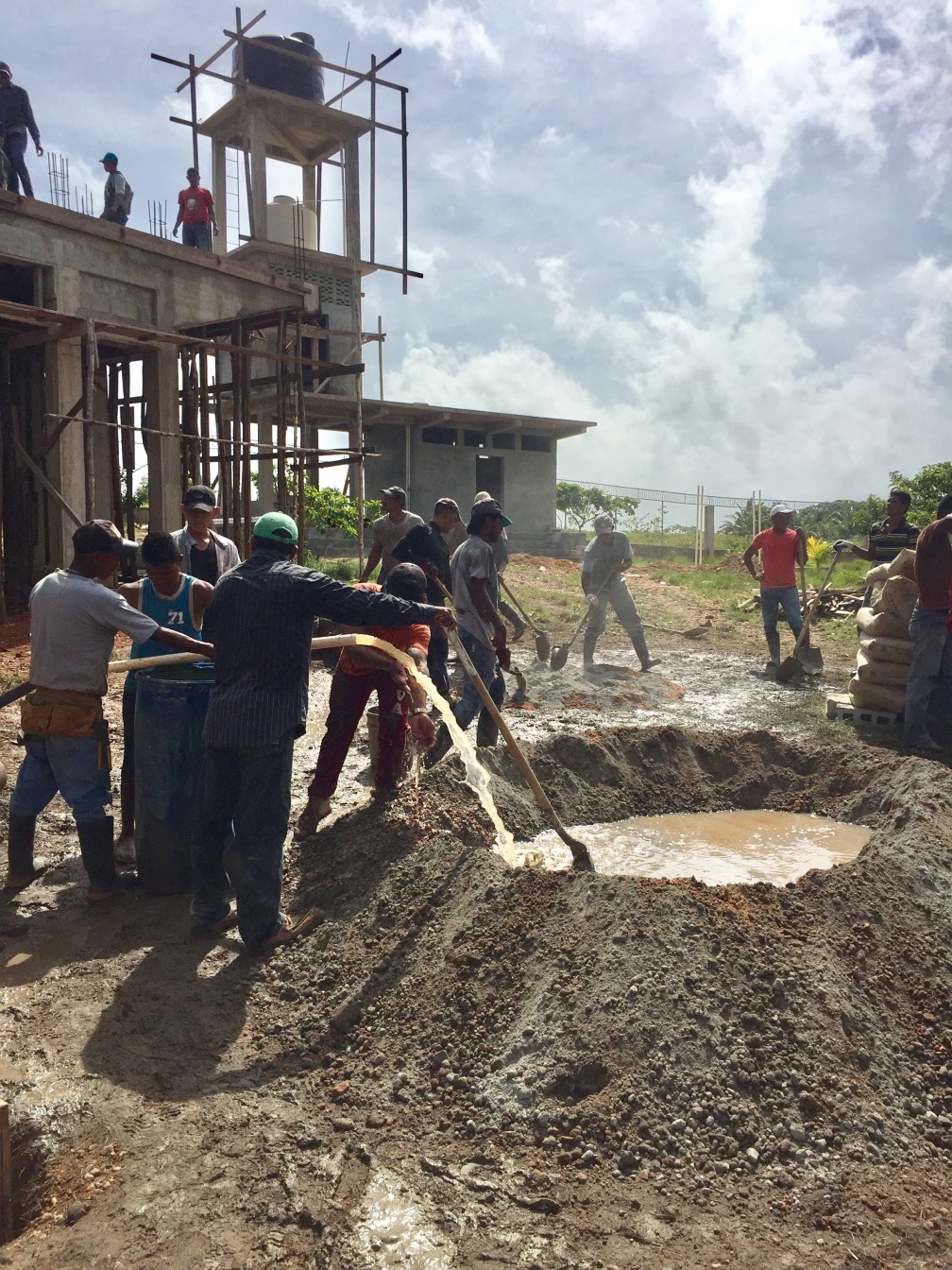 One important side note:  As you can see much water was needed to do this job in one day. And as you also know prior we had some difficulties with getting good water on the property, which included one well just outside our fence that had water but was bad for drinking, another existing well located under the home that we tried to dig out to make useable and then our current well with good water. As God would have it, it took moving the gas well pump to each of the three wells multiple times for water as we would pump one dry and go to the other while the one would replenish. God knew, we didn’t only need one well but He needed us to dig several. What an amazing God, that I love!

It got real interesting when I began to pay the guys – while they didn’t think the pay was fair I was thinking they agreed to work for a flat price and to work until it was finished. After talking with Pastor and Chuck we decided I would pay them double because of the time they were here. That’s when a handful started shouting they wanted 100 more! No, 200 more! And on and on. lt felt as though things could go sideways very quickly as a handful were getting people all wound up, funny thing is a couple of the instigators were guys I mostly saw standing around leaning on a shovels, regardless,  I wasn’t sure what was going to happen and was told by Pastor and Chuck that doubling the pay was fair, so I held my ground and most agreed it was fair.  After sleeping on it and talking more with Chuck we came to the conclusion that I would pay the 6 finishers an extra 100 to have everyone feeling good about their day’s work. Friday, Chuck and I found and paid three of the six men. I told Chuck to please continue searching for the other three – it won’t be difficult in this size community. Anyhow that proved to be a good choice as they appeared to be grateful. That is something you would think abounds due to lack of work and difficulty in finding monies in this area? Not so with everyone; please pray for softening of hearts.

I confess that situation had me battling with the flesh of the “old-Mike.” Hearing certain people yell at me, words I didn’t understand, had gotten my heart rate up and feeling the hair standing up on the back of my neck, I was beginning to feel a bit froggy. I was ready to defend myself and my heart sank. I love these people, we are here to help, how could this be? I feel God certainly had his hand on this situation, and I’m grateful He carried me through this making sure the monies were available to double everyone’s pay, keeping arms, machetes and shovels from swinging and allowing such a massive undertaking to be successfully completed.  After everyone had left, our crew, Pastor Ludy and I gathered in prayer over all the workers giving thanks for the completion of the casting. Big difference in ten to twelve guys working or a crew of 125, all in a days work in La Moskitia. 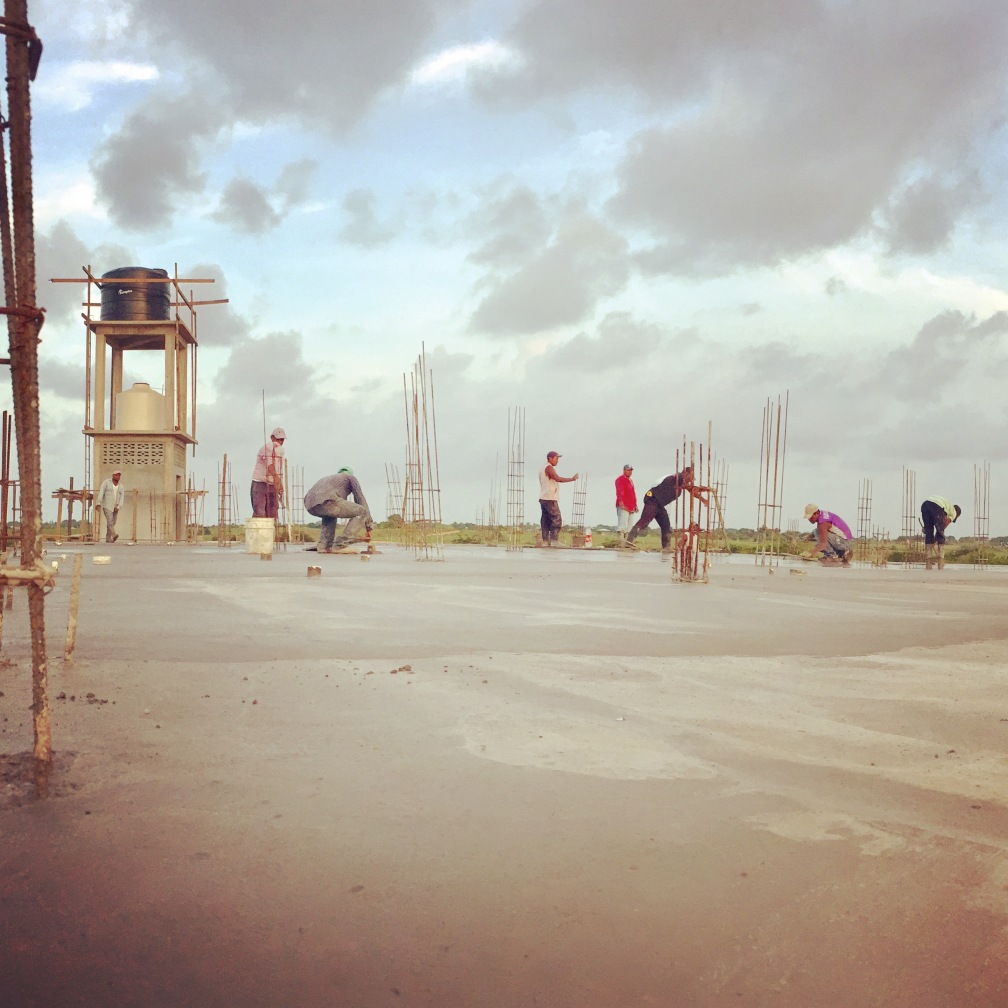 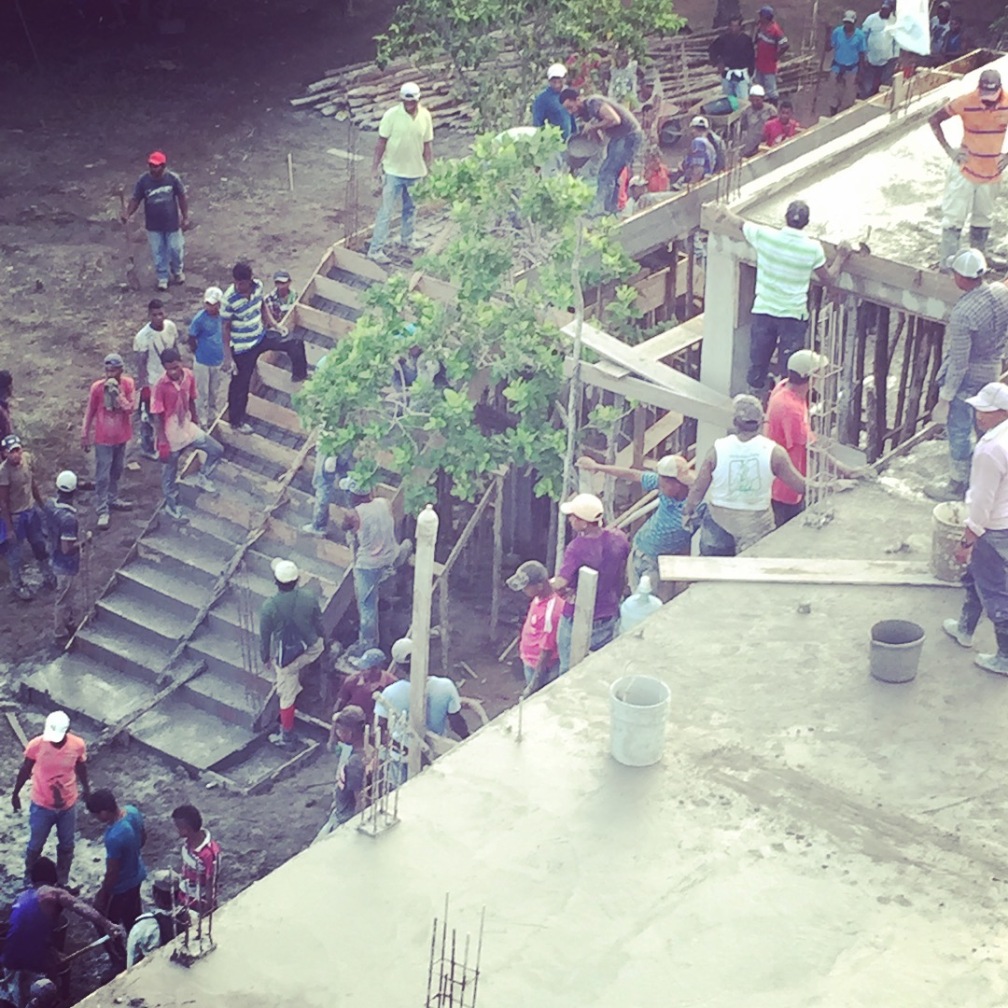 Friday was spent running errands getting materials to finish hooking up the solar pump for the well, ordering block and locating yesterday’s finishers to give more monies. 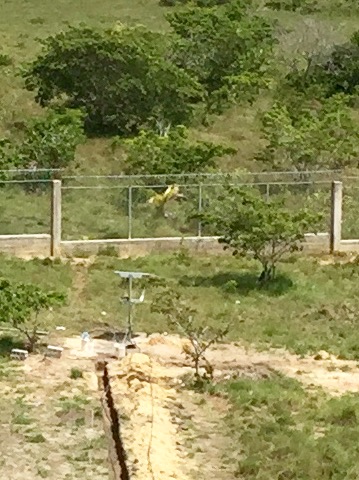 I forgot to get good pictures of the well progress but the solar panels are mounted, the pump is set and pumping about three gallons per minute, 180 gallons per hour, 6-10 hours per day, everyday! And the well is not running low on water. Praise God!! I did also forget to pack a water testing kit, but the water is running clear so I drank it…it’s all good. Thank you Lord.

We were also able to layout all the walls, doors and windows by marking the floor and going over the drawings with Chuck, Winsis and Jonny. 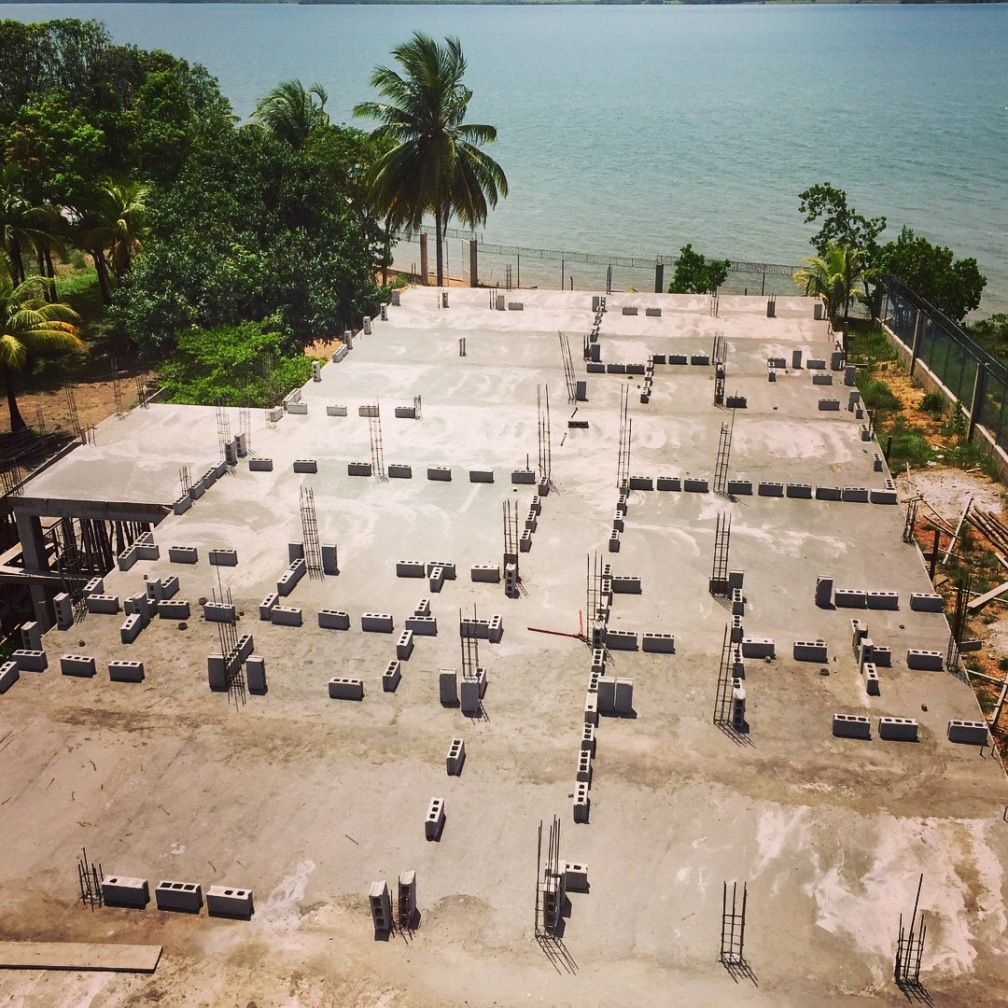 Lisa and I also got to spend some time with Miguel and Deneve, two of the IVA students we have been blessed to sponsor since they began 7th grade.  They are now 10th graders and doing very well!  They will be part of the first class to graduate high school in 2019! Also included is a picture of Marco and Irais (pronounced Edious). 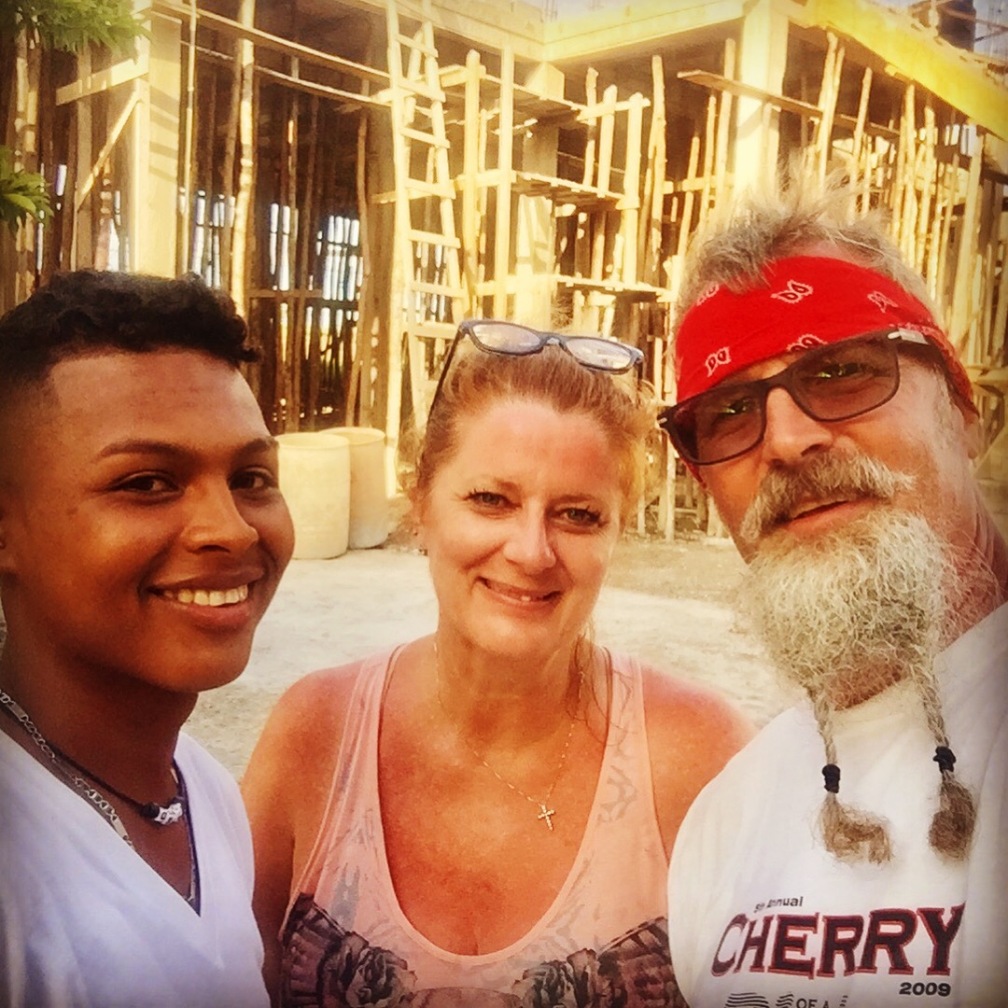 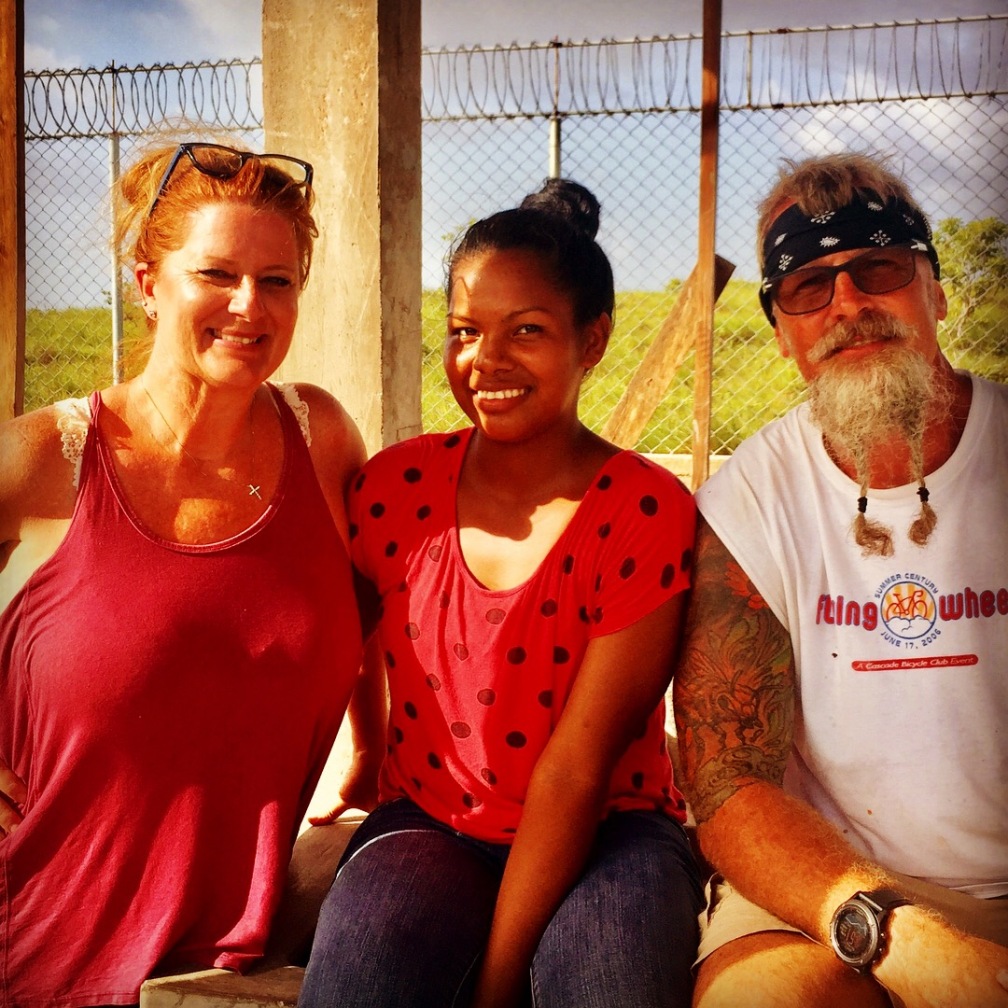 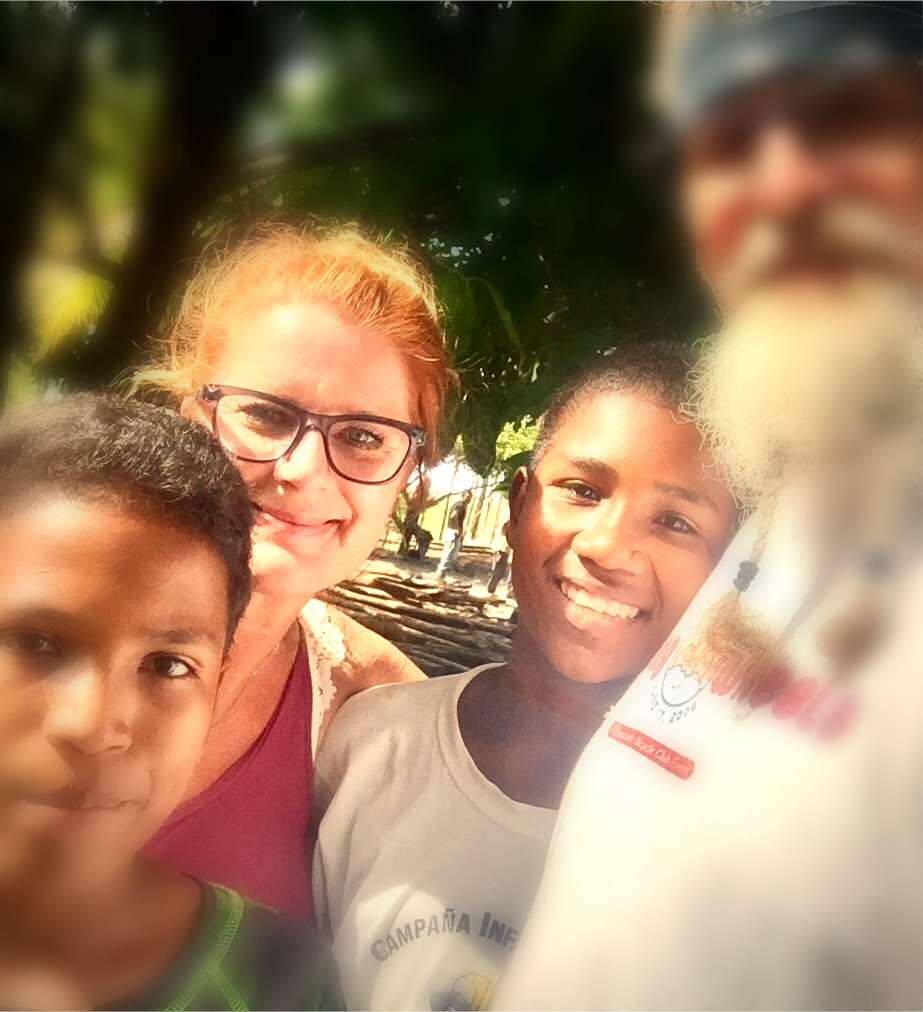 At 5:30 pm Friday I remembered I had told a prisoner at the jail on Wednesday that I would come and purchase a boat he built for me on Friday before lockdown at 5:00 pm.  It helps him to purchase food, laundry soap, body soap, toothpaste that sort of thing. At about 6 pm I arrived at the prison, and thankfully the guards and warden know me from visiting the men on Wednesdays. I explained how I had given my word to purchase a boat from one of the guys and asked if there was anyway they would allow this man out from lockdown to sell me his boat. 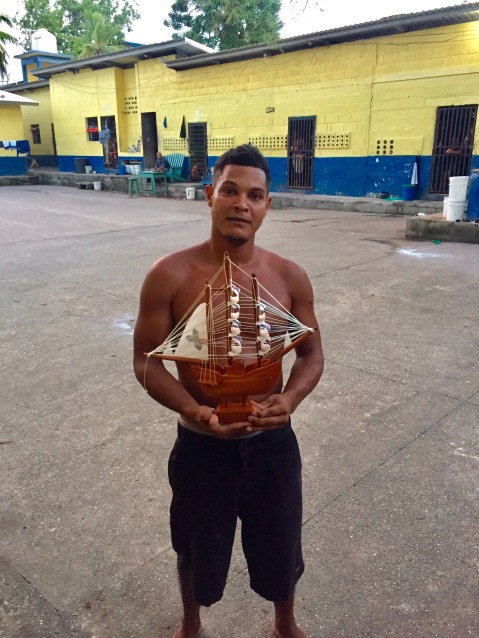 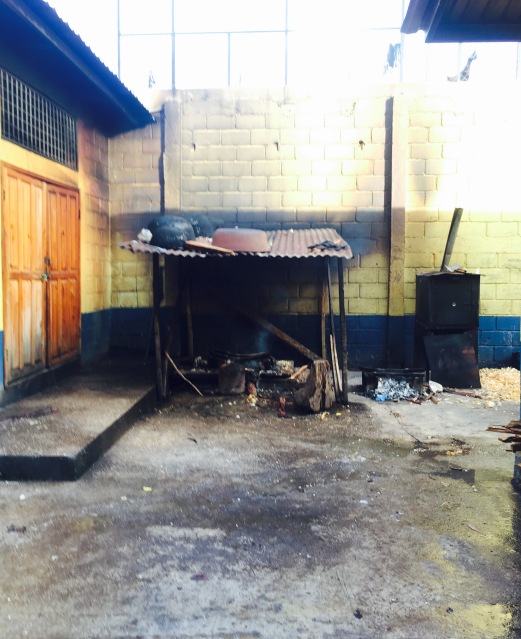 (Picture of the craftsman with his boat and the area where they can cook their food inside the prison yard.)  Again I’m grateful the warden was moved and allowed me to keep my word. 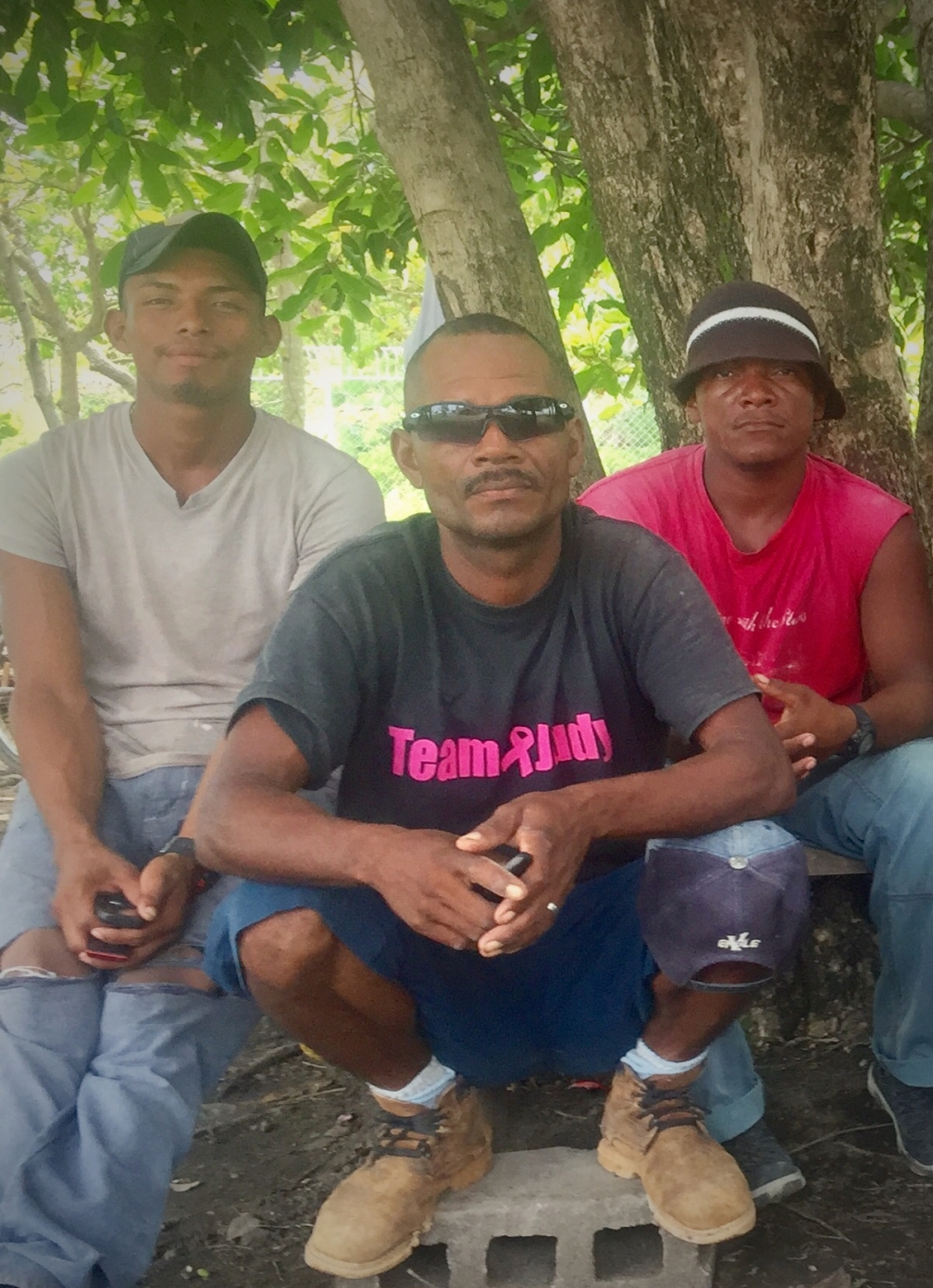 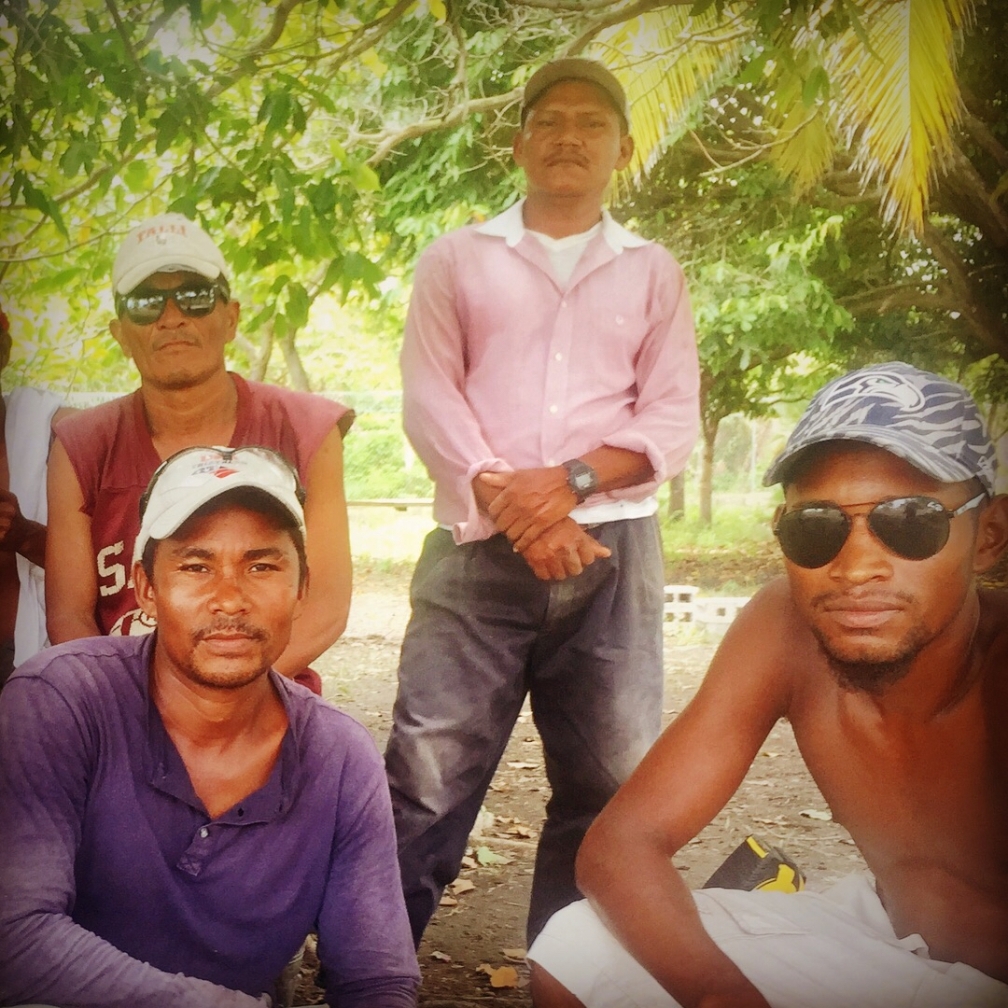 15 Then He said to them, “Go into all the world and preach the gospel to the whole creation.  16 Whoever believes and is baptized will be saved, but whoever does not believe will be condemned.  17 And these signs will accompany those who believe: In my name they will drive out demons; they will speak in new languages; 18 they will pick up snakes; if they should drink anything deadly it will never harm them; they will lay hands on the sick, and they will get well.”

Thank you all for reading. May you be deeply blessed for praying and supporting this ministry. We are currently 72% funded.  If you are feeling led to give a one time donation or to give monthly to support the boys who will be living at Casa Del Camino please check out our mission page ACTION International: Mike and Lisa Brenner.

5 thoughts on “Buckets For Hire…”