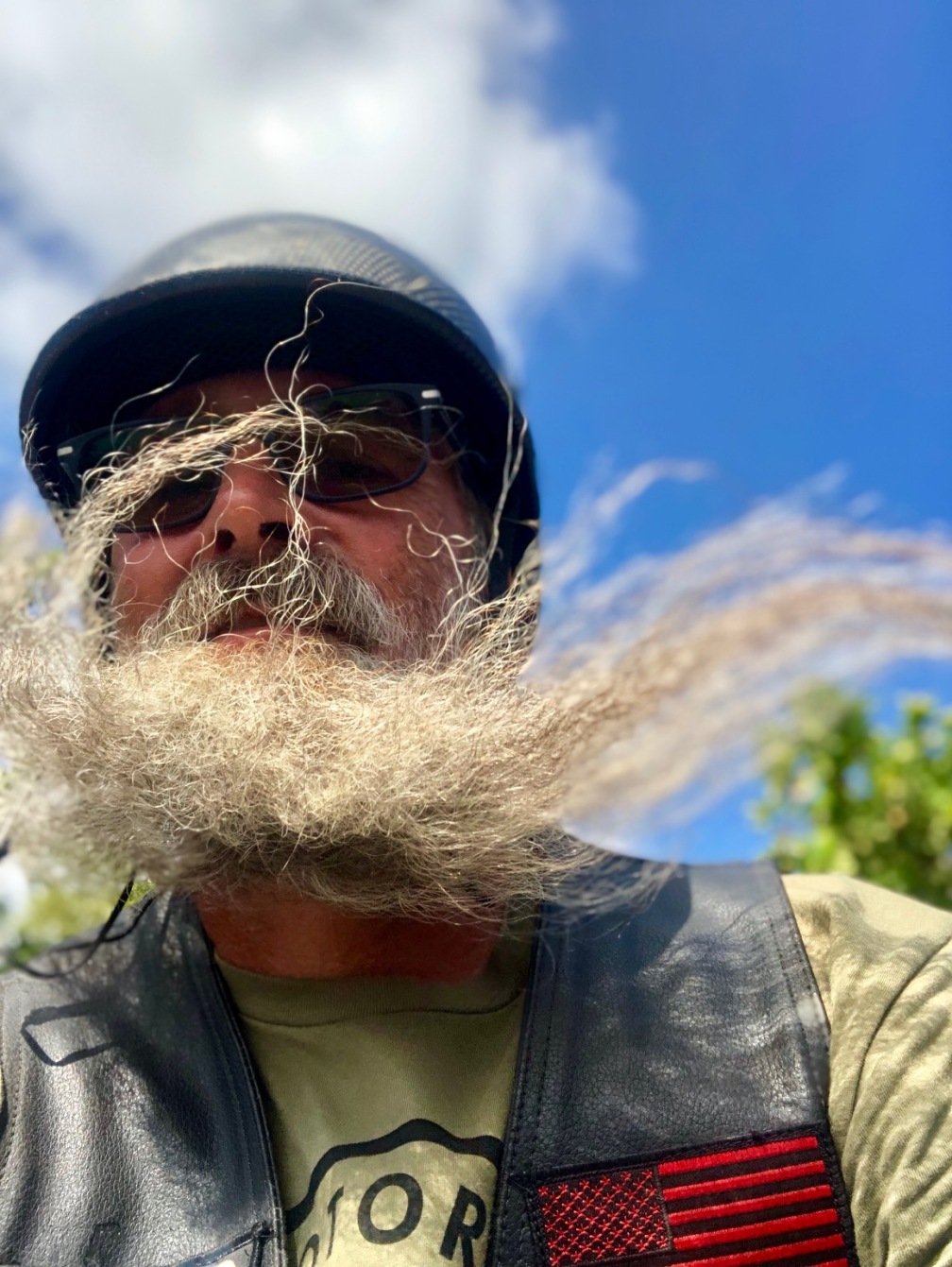 I always loved the ride.  Getting away,  a way of escape,  a way out,  to seek the unknown, the excitement and uncertainty of what the open road holds in store each day.  But then, everywhere I ended up, there I was, same as always ever was.  Empty always searching for the next RUSH.

Then I found Jesus, my Lord and my Savior, my peace, comfort, joy, strength my all in all. Since then I have continued to see Him provide for me in my life,  He has changed my heart,   He has protected me,  He has empowered me,  He continues to strengthen me,  as He builds my character,  He has healed me,  He is developing wisdom in me and He has given me purpose and direction in my life. During this ride I saw and experienced all these and more!  God is so good.

Most rides I spend all of the time riding away from this or that but on this particular ride I found myself on a ride to, a deeper relationship with God, and a ride to, my gift from God, my best friend and my wife Lisa, and to, our future life together pouring into the lives of the boys of La Moskitia.

I am sorry that I was not able to write as often as I wanted due to the tempo of the ride, most everyday waking at 4am for devotion, on the bike and riding before first light 6am. The Ural is a bear of a bike, quite big and strong, often times feeling as if you are wrestling rather than riding, and it is not known for its speed which means that in order to make our 350-450 miles a day, we were riding 12 hr days with our longest being 16 hours.  As many of you already know I made it home to Lisa Wednesday night (November 7).  Yesterday was spent changing fluids in the bike and adjusting the valves, and the moto is running very well.  After the beating she took in the Guatemalan mountains, my confidence has been renewed in the Ural.  The bike is going to do very well in La Moskitia, and the reception it gets everywhere I have been leads me to believe it is sure to be a hit with the Casa Del Camino boys.

A few highlights you haven’t heard about would be the young guy “Israel” that I met on the long boat ride across the Gulf of California from the Baja to Mazatlan.  Israel was a religious guy but he didn’t have a personal relationship with Jesus.  I was able to share some biblical truths with him and some of the ways I have experienced God in my life, and I got to pray for him and his current situations.  The next morning, Israel was crying as he told me that he had just spoken with his mother who told him she had a dream last night that he (Israel) was standing before Jesus who opened His arms and had embraced Israel with a tender hug, telling him he was loved.  Please pray for Israel to come into that personal relationship with Christ.  I exchanged numbers with him and will be following up with him this weekend.

I got to spend November 2nd in the beautiful city of Guanajuato, Mexico for the Day of the dead festivities that night. 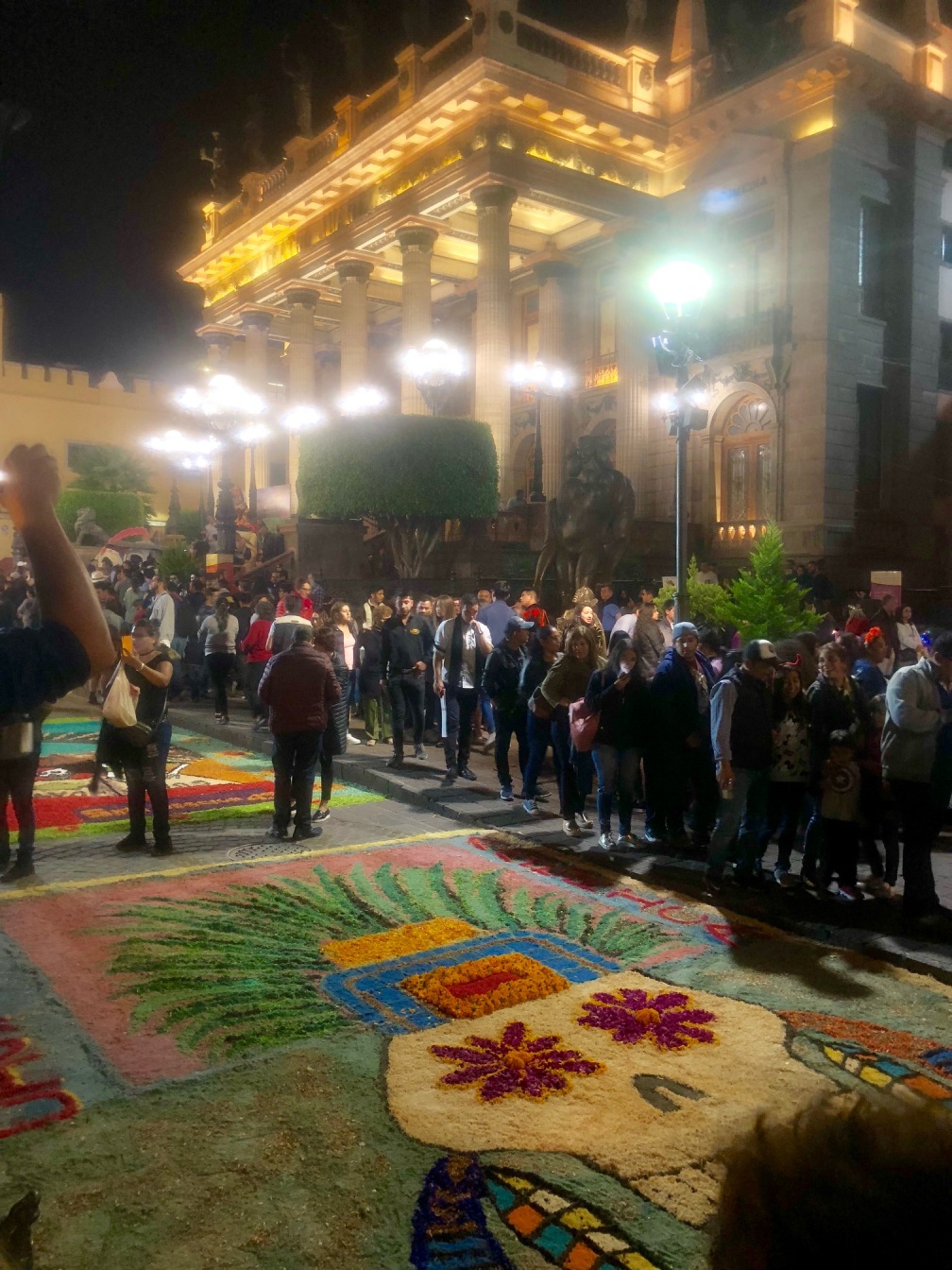 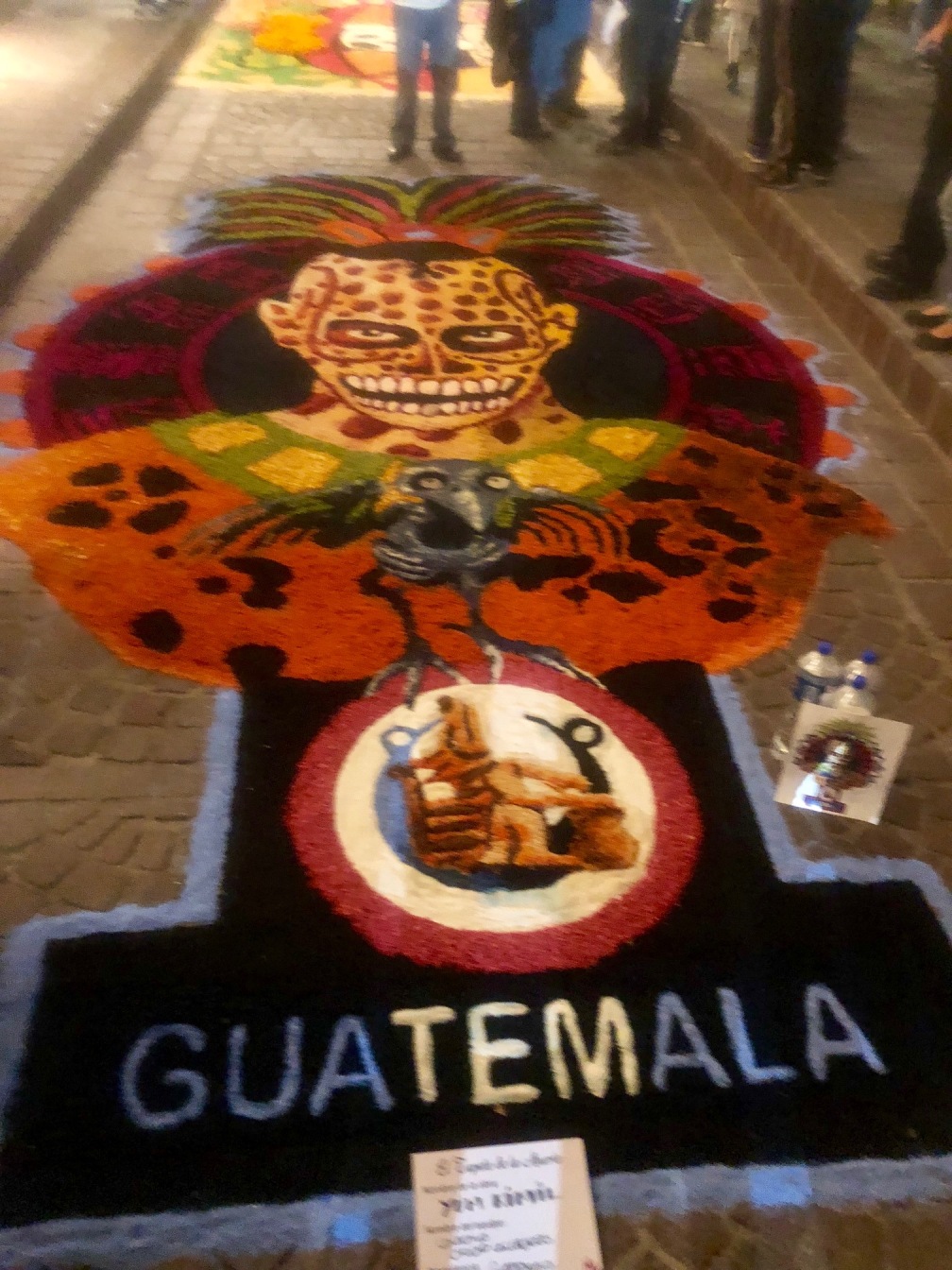 More street art. This is one of the “voted best” 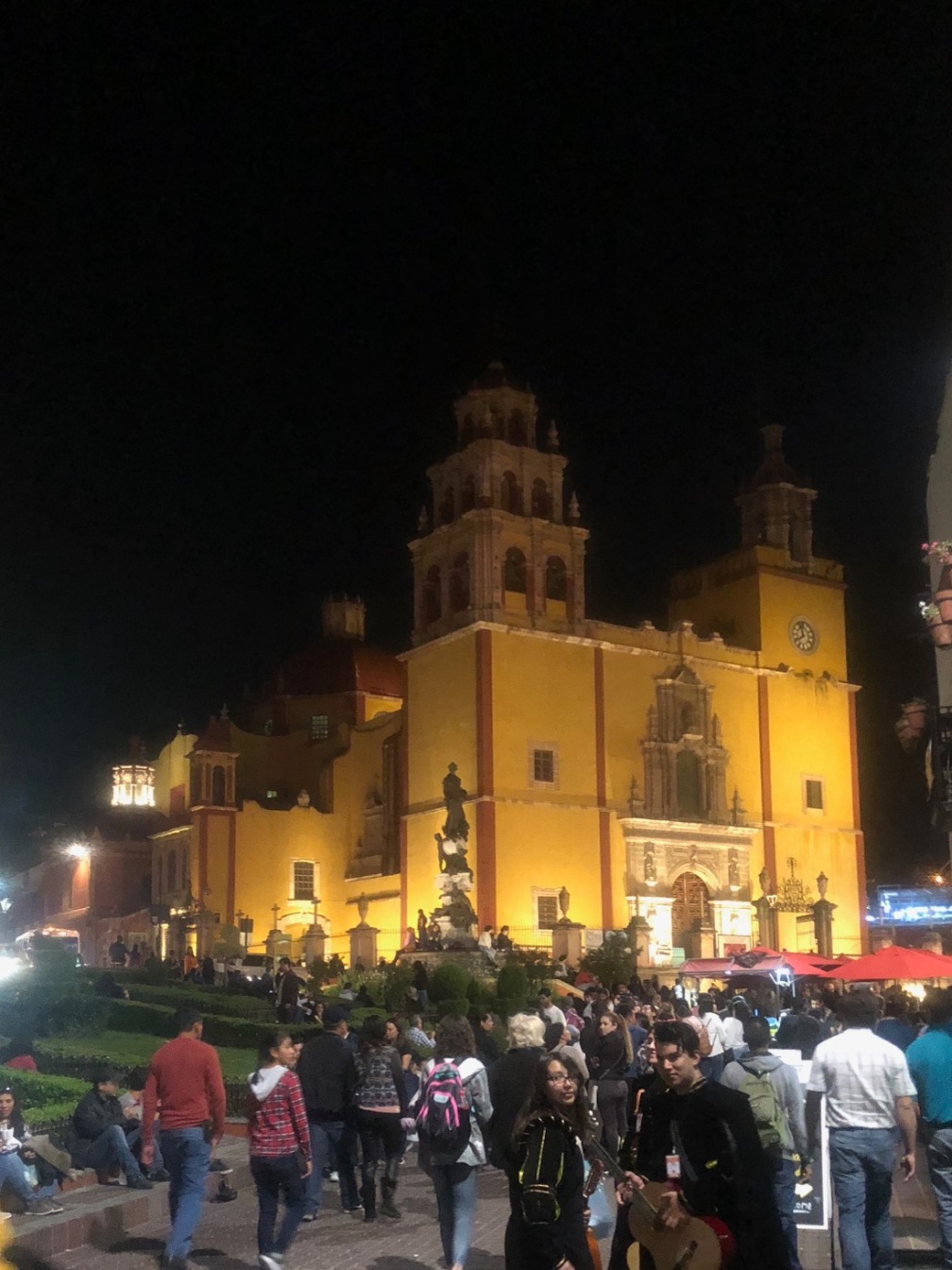 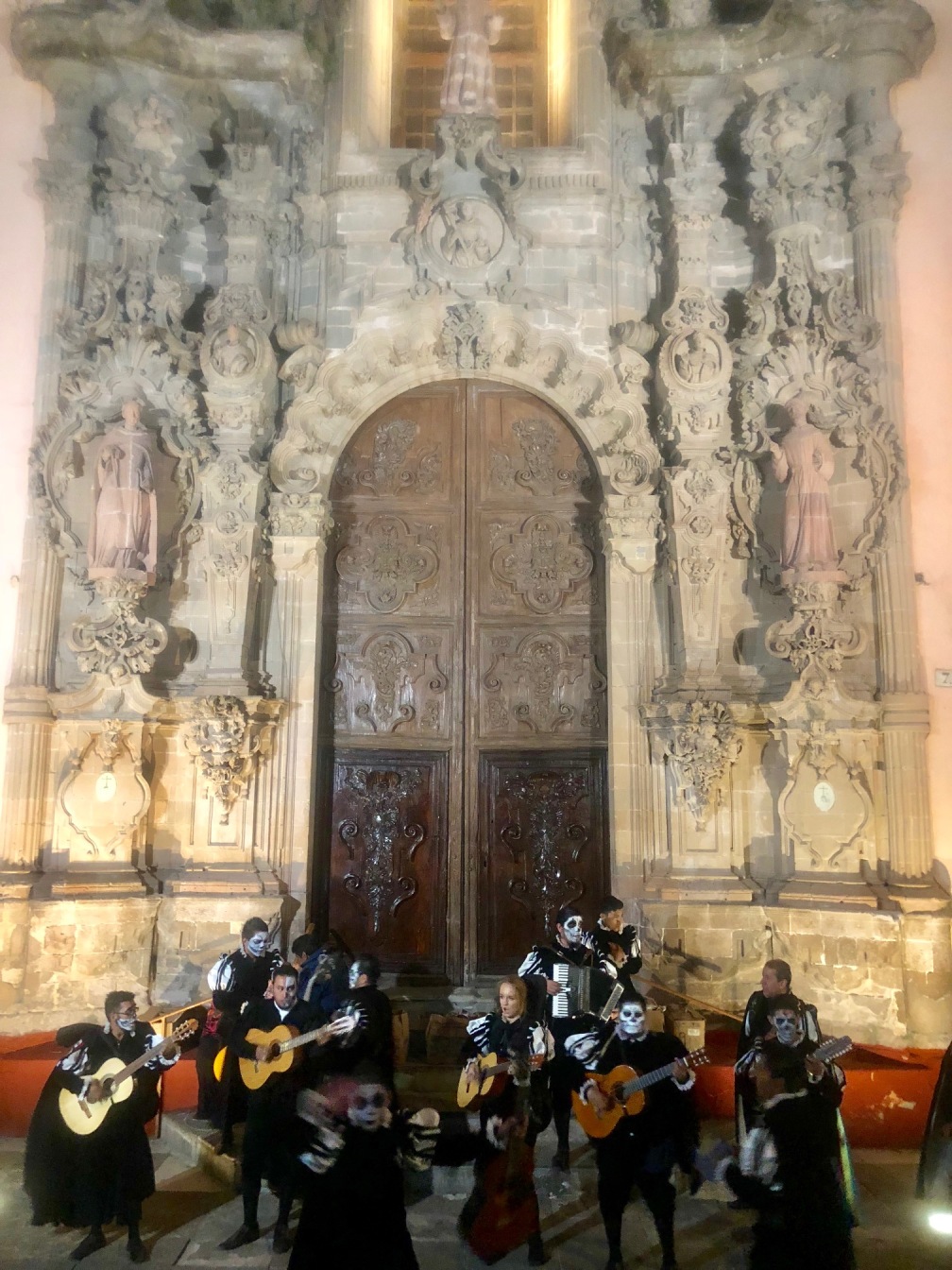 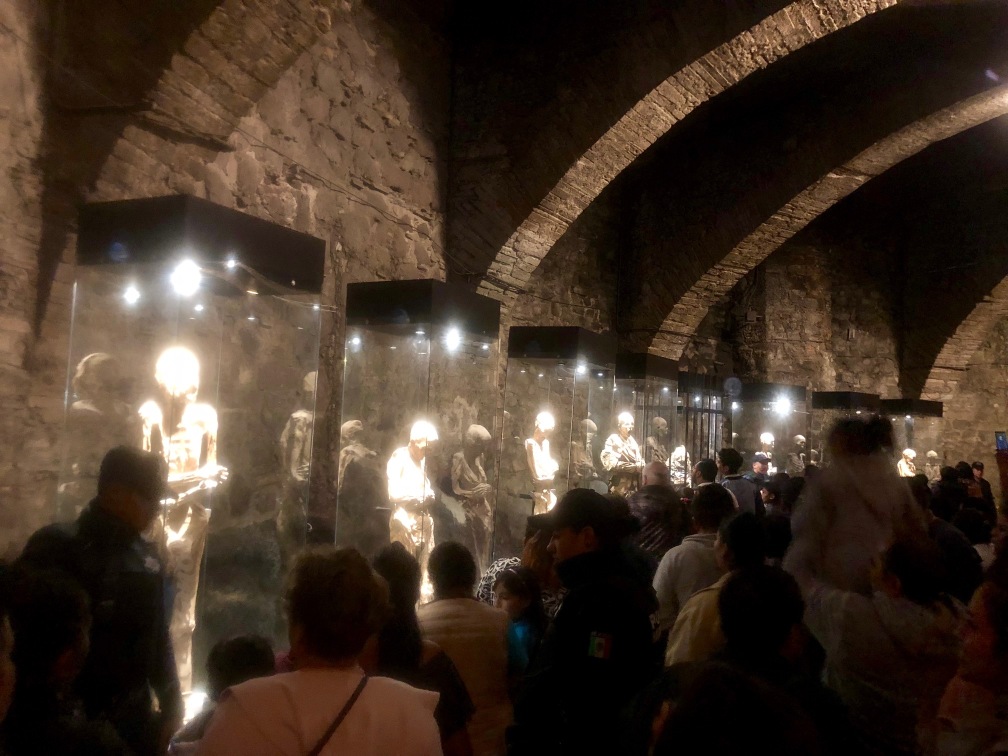 Many mummies, each with its own story.  The tunnels are actually old mines that have been turned into a road system under the city.  Cool history in this city. 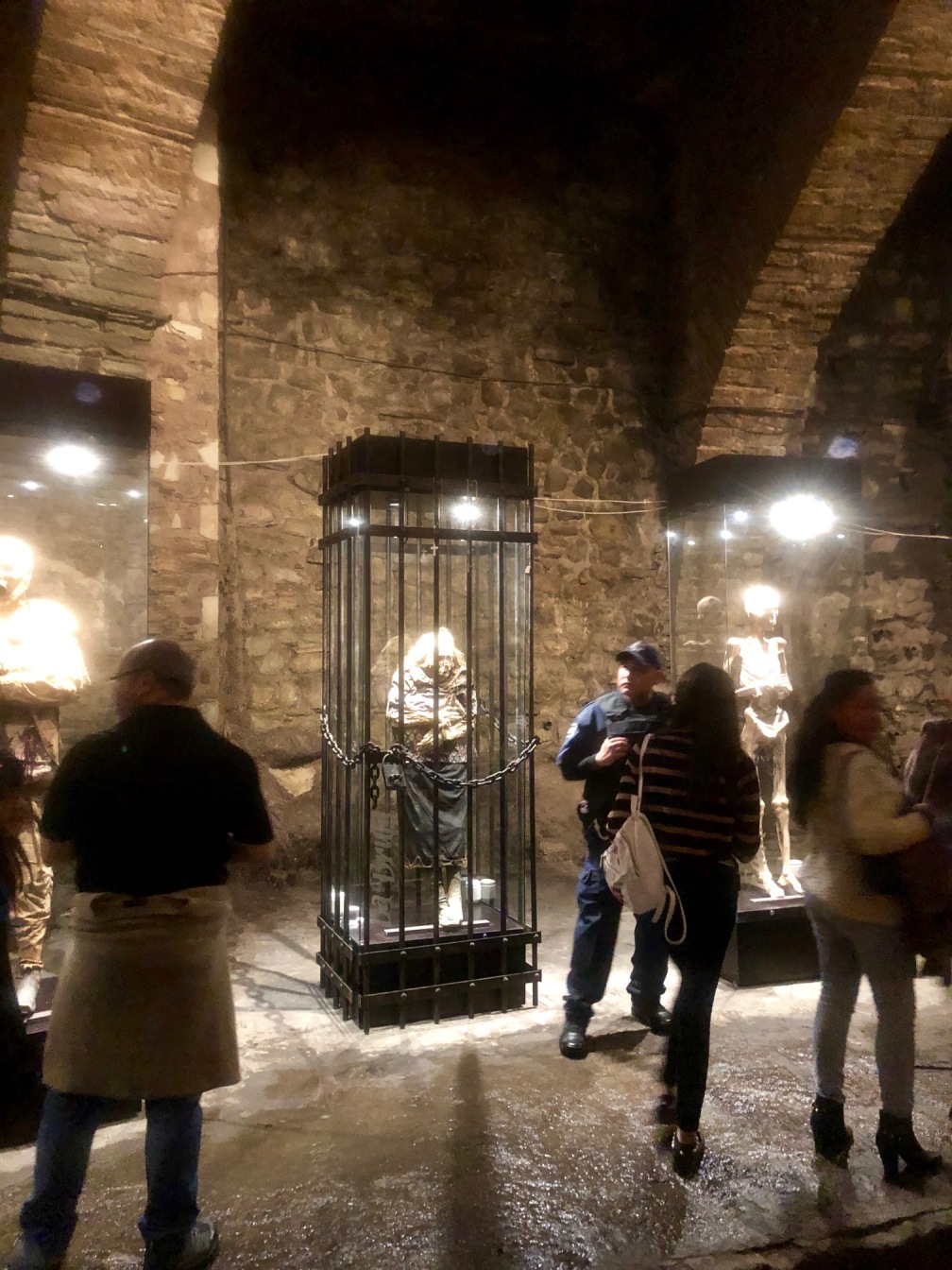 A witch kept in a locked cage

We traveled many beautiful mountain passes while heading to Veracruz, Mexico then encountered many, many miles of country roads with scattered pueblos to San Pedro Tapanatepec, Mexico along the Pacific coast and more Mexican mountain roads to the border crossing at La Mesilla, Guatemala.  I saw many people on tops of trains heading north, and also semi truck trailers loaded with people heading north. The small border crossing we chose was at a standstill just inside Mexico from all the foot traffic heading north.  The idea that these people are making this trip on foot is staggering to me, just the distance we are talking about, and I don’t understand the thought that somehow America is their fix? 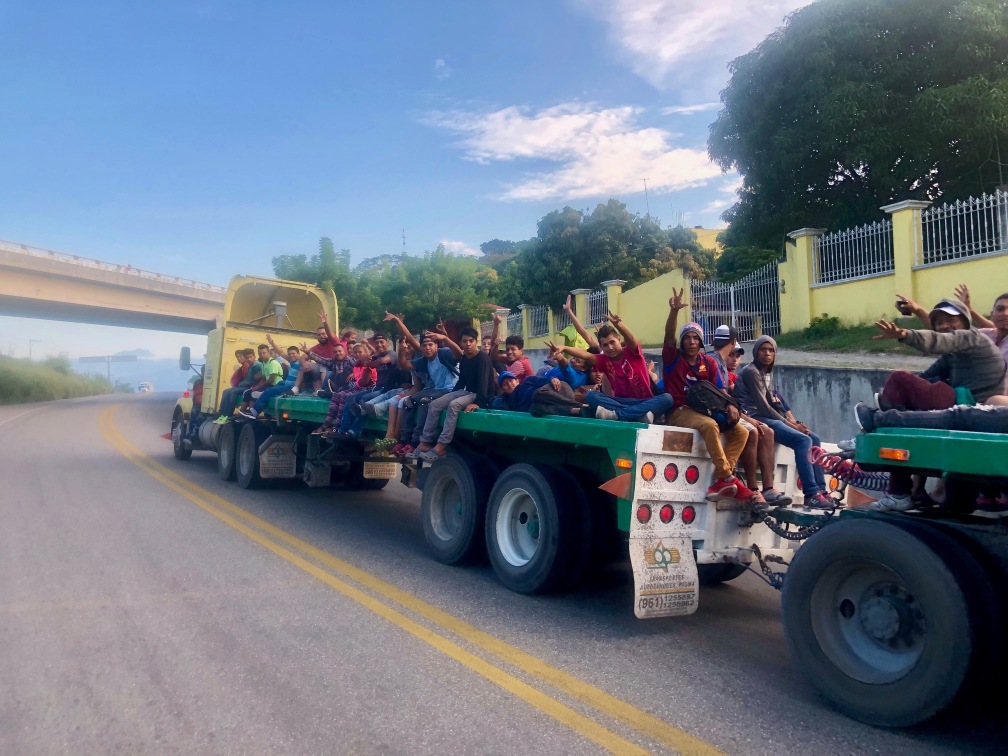 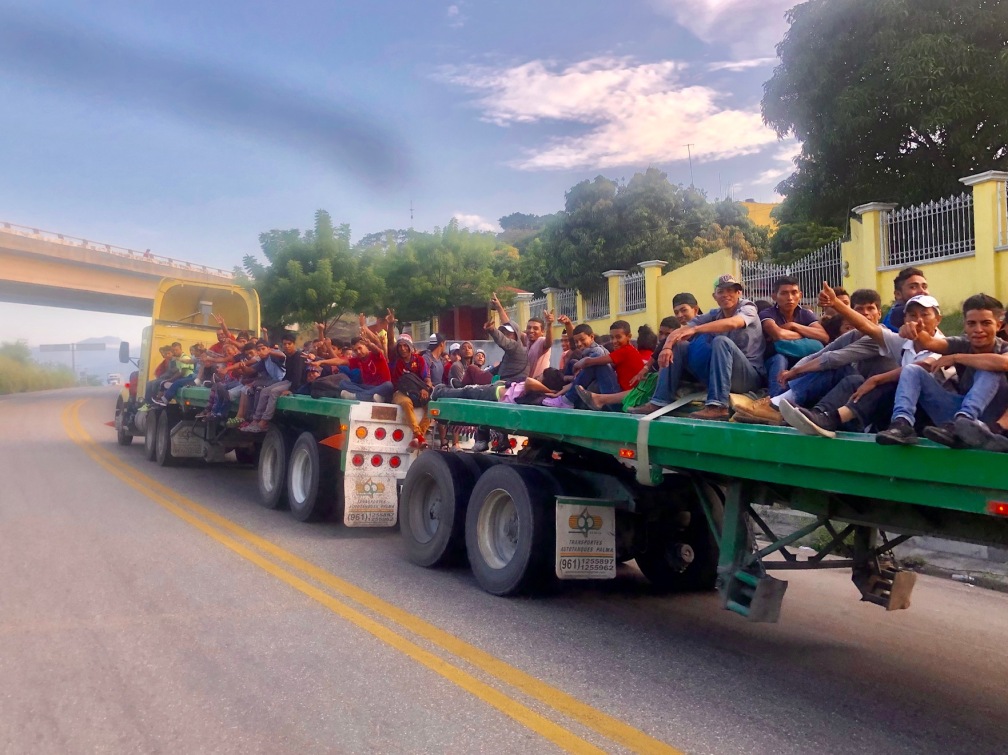 Not seeing many women or kids – only able-bodied guys? 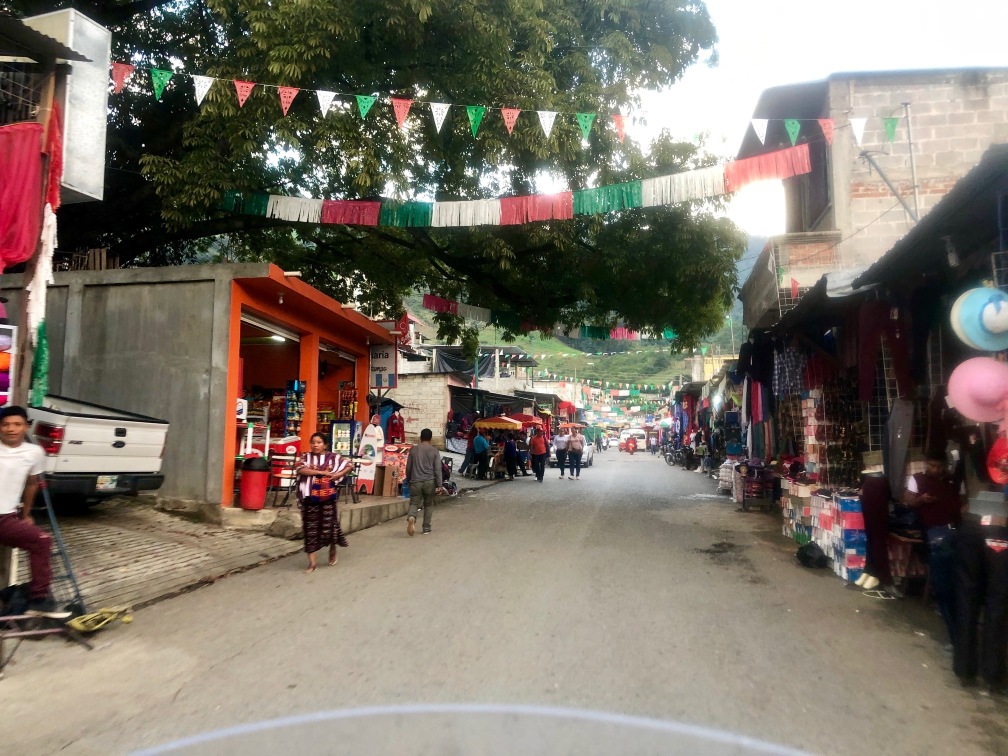 Mexico to La Mesilla, Guatemala, border crossing funnels down into a smaller and smaller road 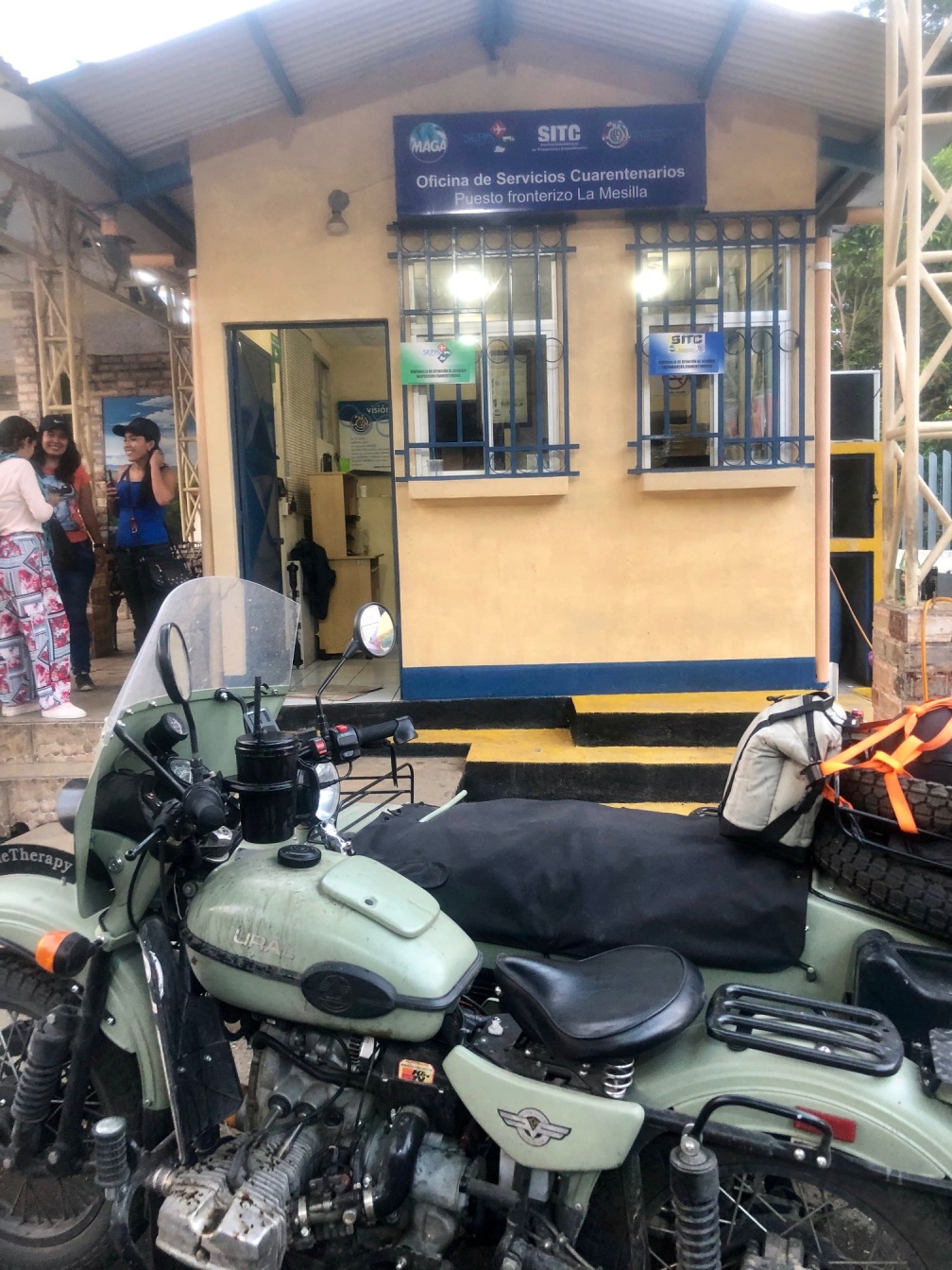 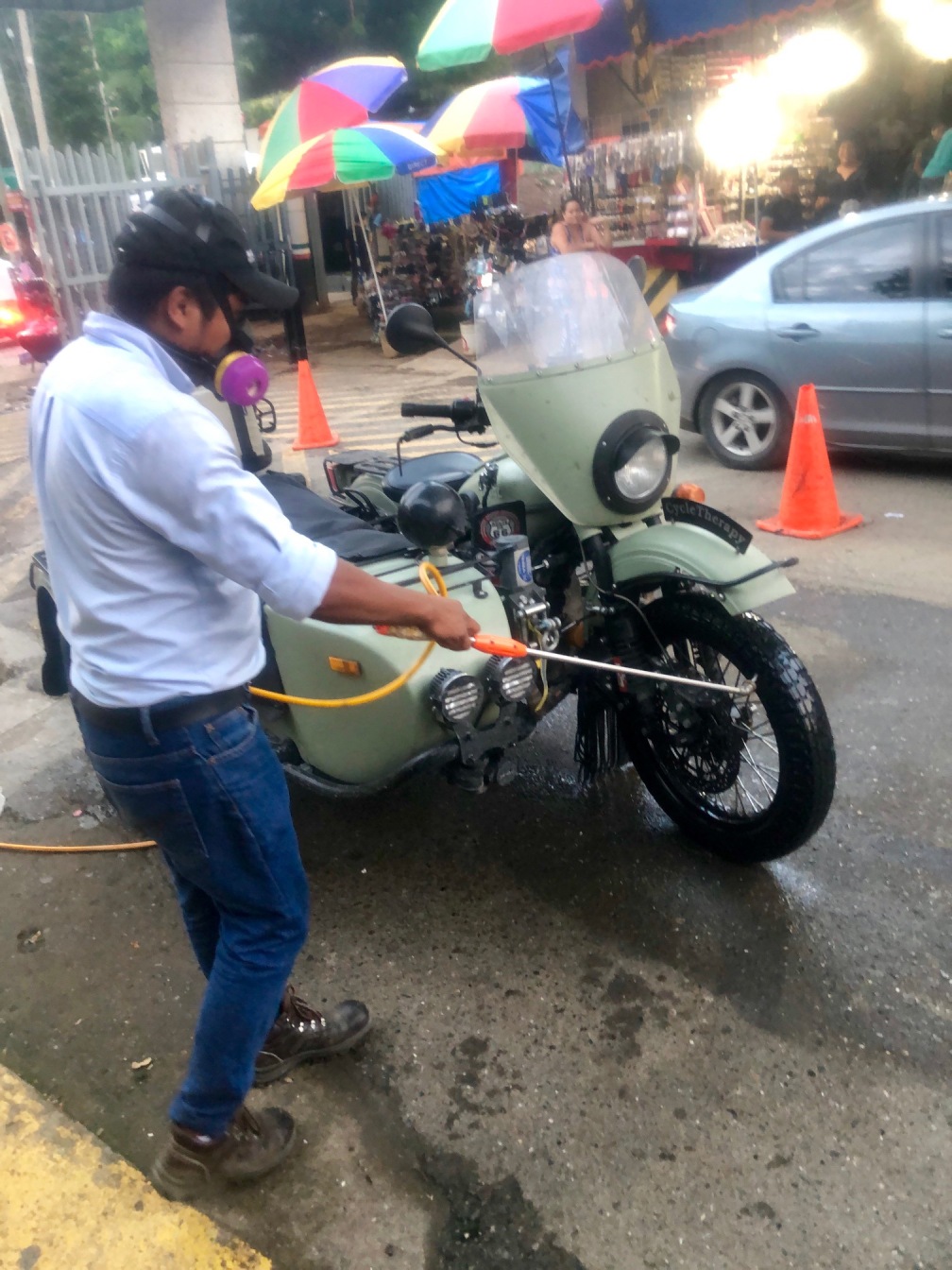 “You are not bringing any of the Mexican dirt into Guatemala!” Seriously though a respirator?

From the almost unnoticeable border crossing into Guatemala, we began to climb. We opted for the remote route and ended up in some of the most beautiful mountainous, rural areas of Guatemala!  Just as we were getting into a groove setting the pace for the day we came up to a national protest where college students, families and faculty had organized a shut down of all the roads in the country.  We arrived at the blockade about 7am and worked our way to the front line where the Ural received a lot of press.  We were first told the protest was to last a couple of hours and we should be back on our way by 9am. Then we were told it would go on until noon.  As we began making friends with the crowd, I was able to share some of my testimony with a small group and about the meaning behind my tattoos with Matt translating for me.  It was a huge success and shortly after, we were told they would let us pass as we had nothing to do with the problem and they seemed to understand that we had ministries to get back to.  Again, thank you Lord. 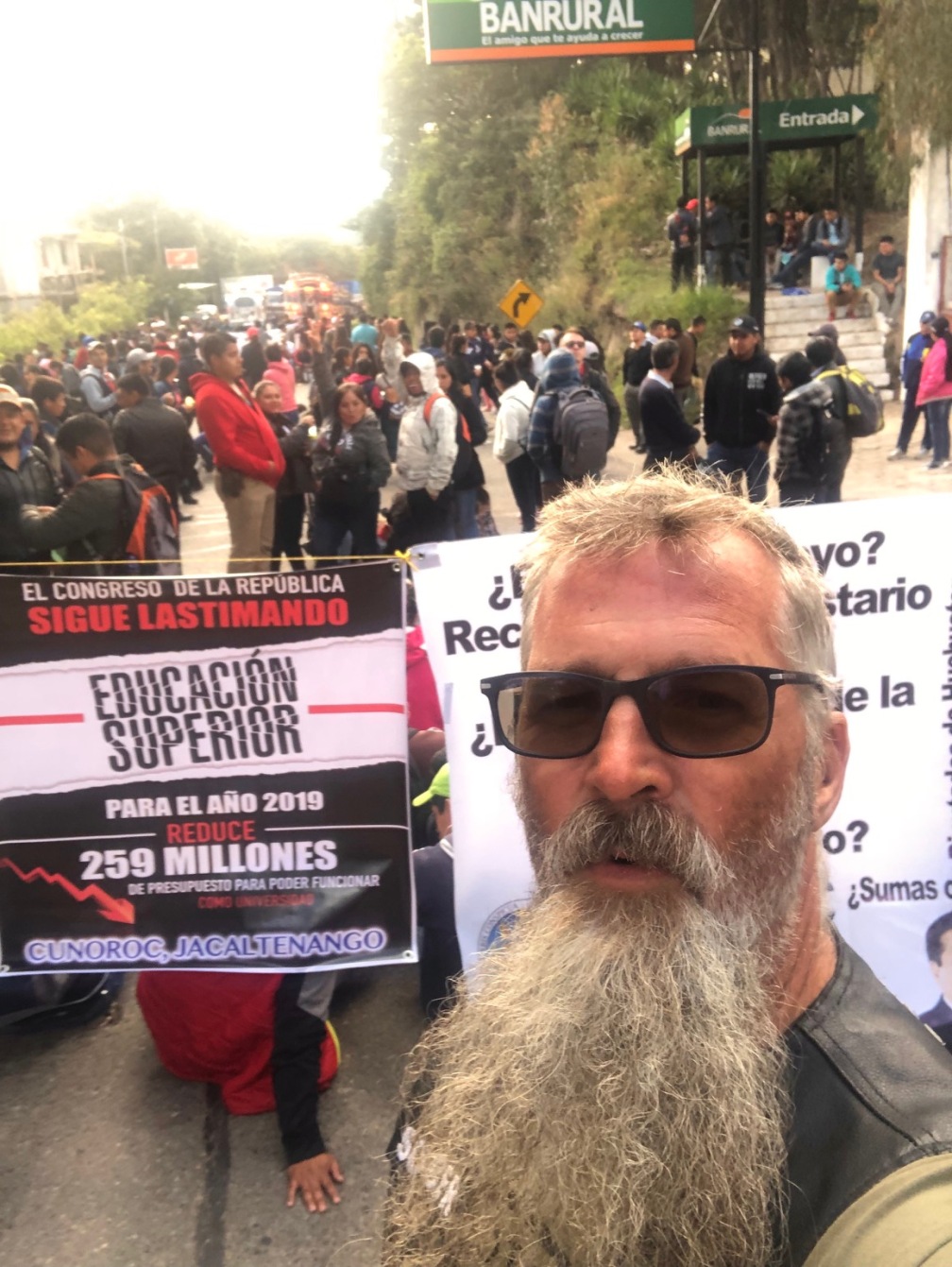 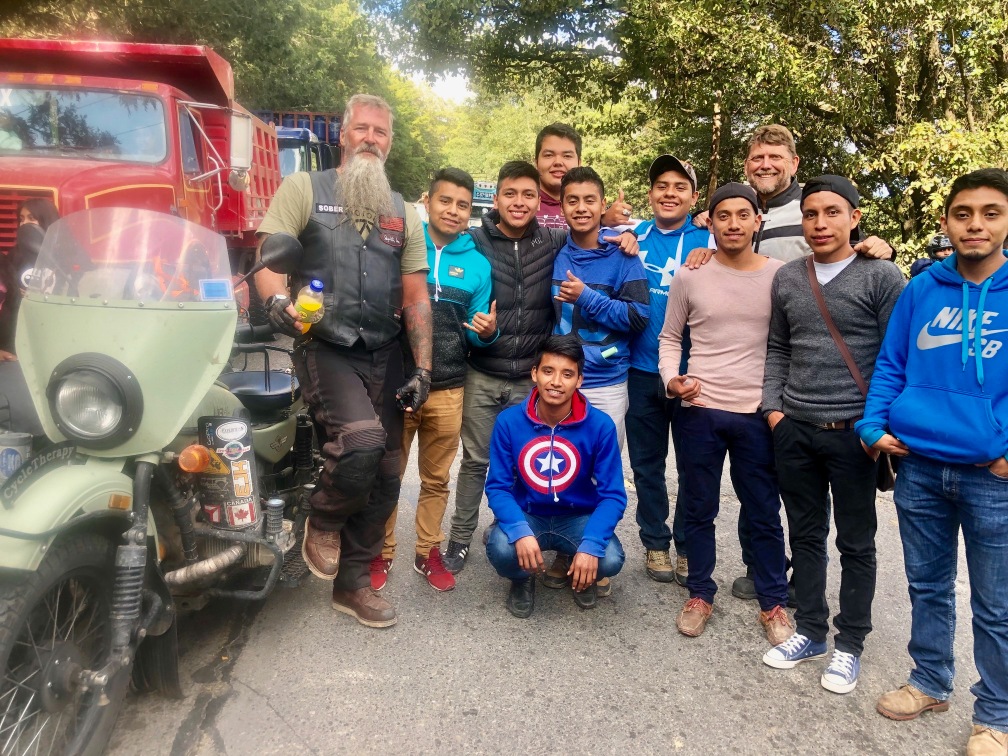 Some guys who heard the Good News!

Eventually we found ourselves on a grueling, bike pounding three-hour stretch of un-managed dirt and rock roads.  The continual beating finally had its way with my spare tire carrier and rack causing lost nuts and bolts, that eventually required additional straps to secure for the remainder of the ride. 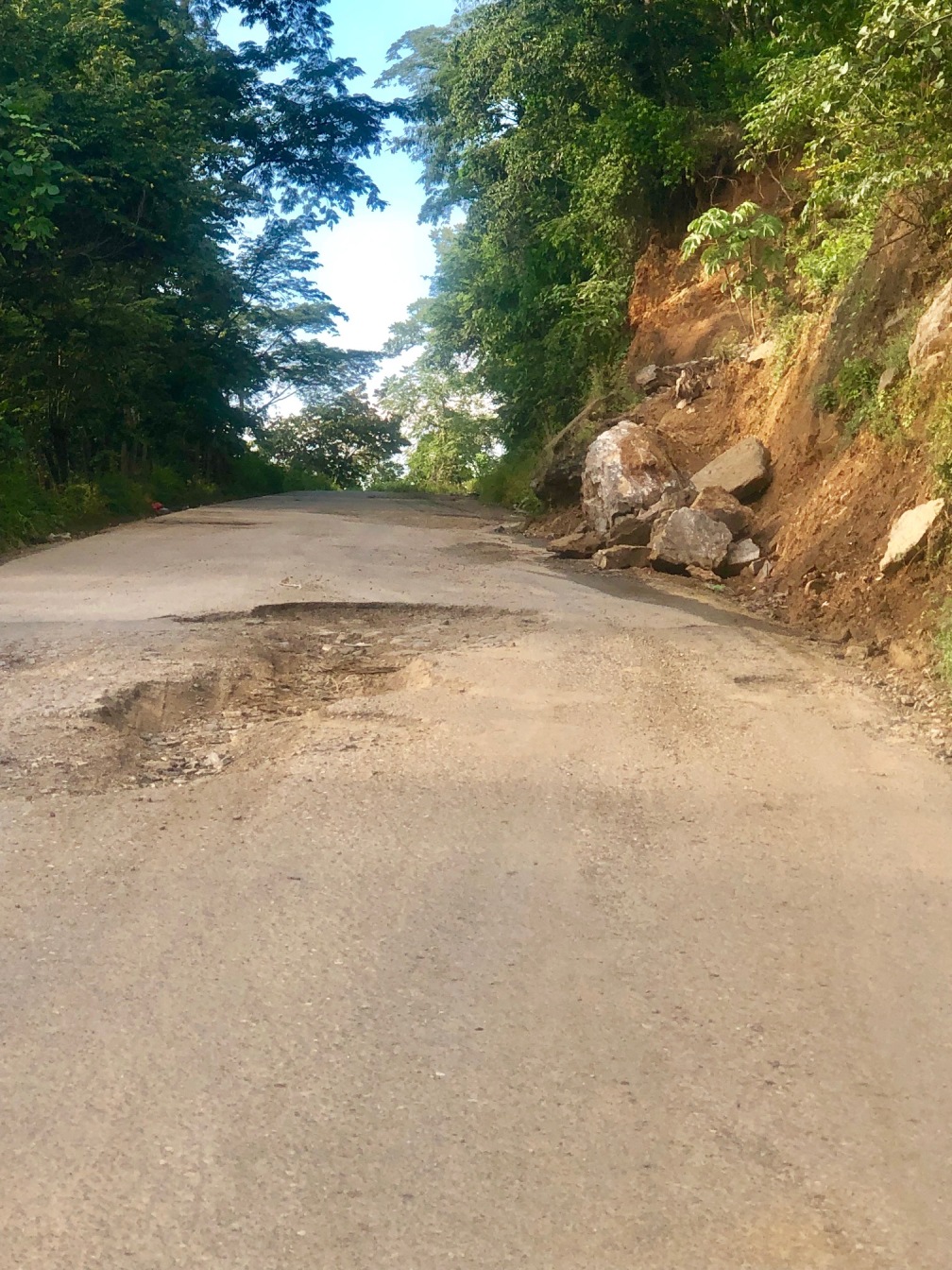 Road conditions were worse than this actually shows. 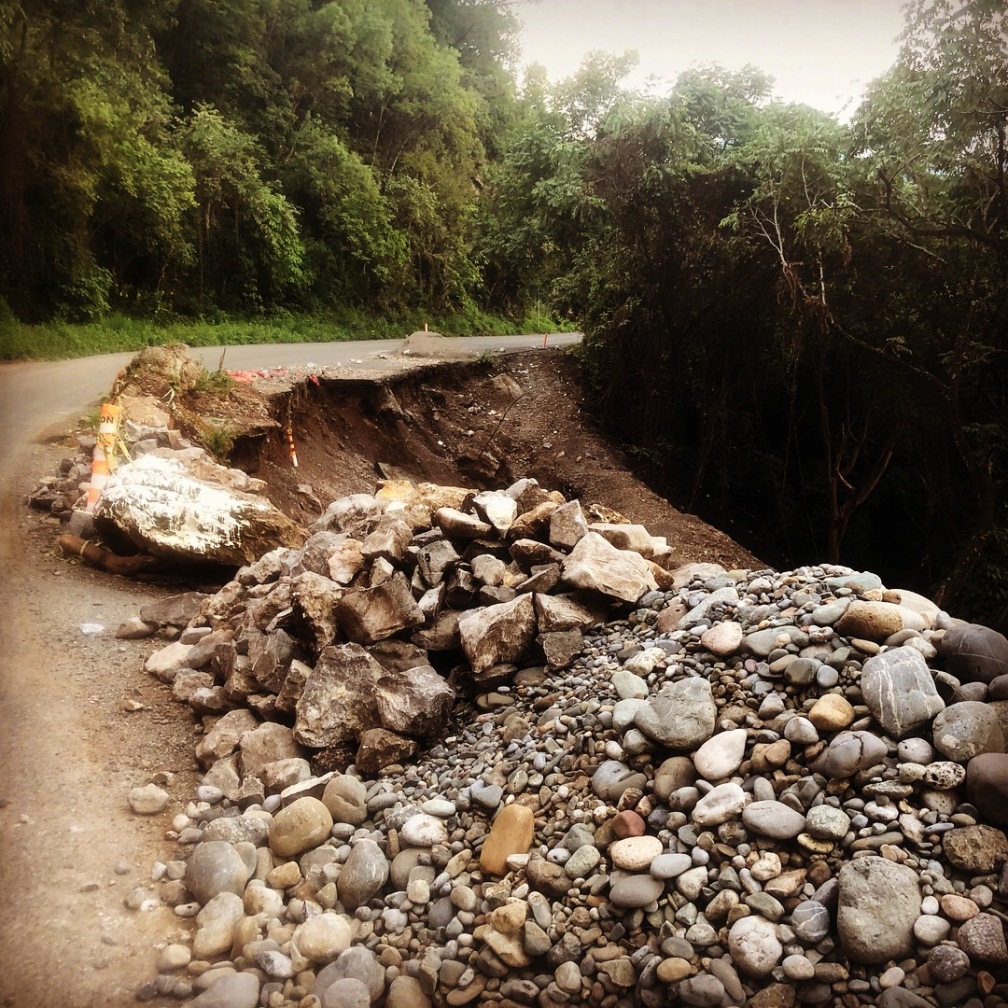 Usually I was unable to take pictures as conditions were not safe to do so. 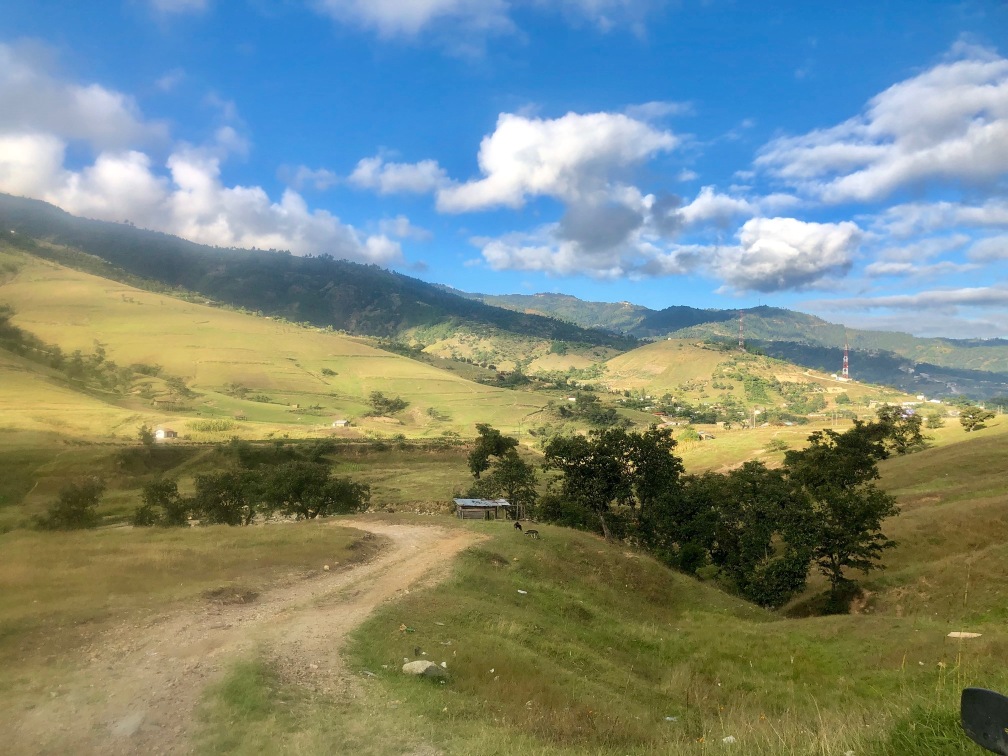 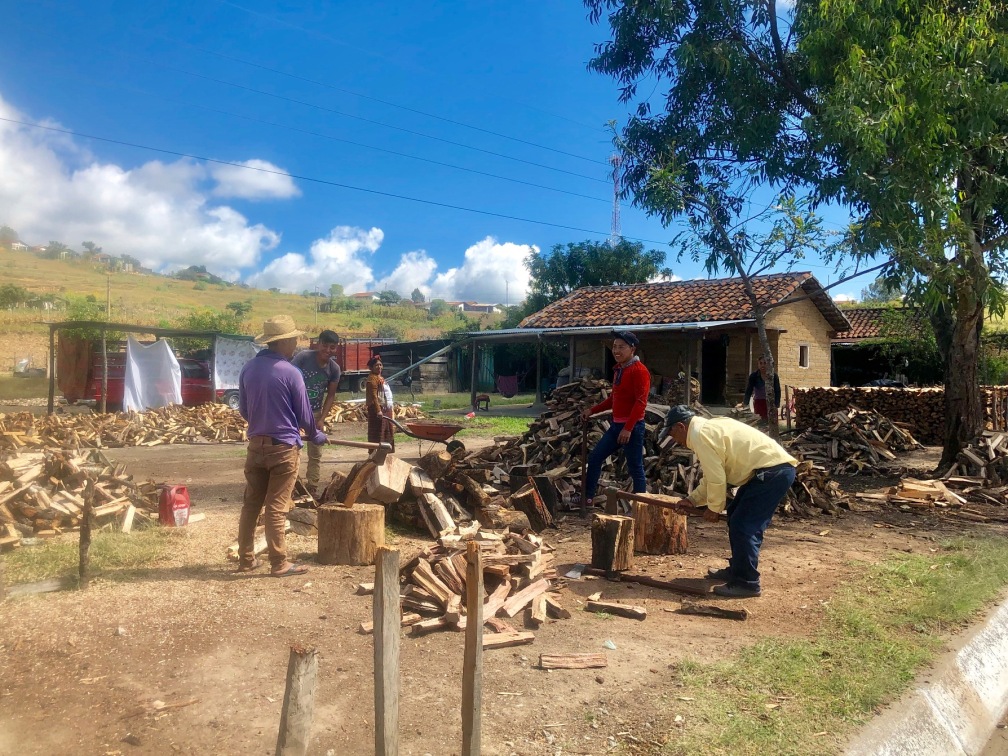 The whole family is in on the action 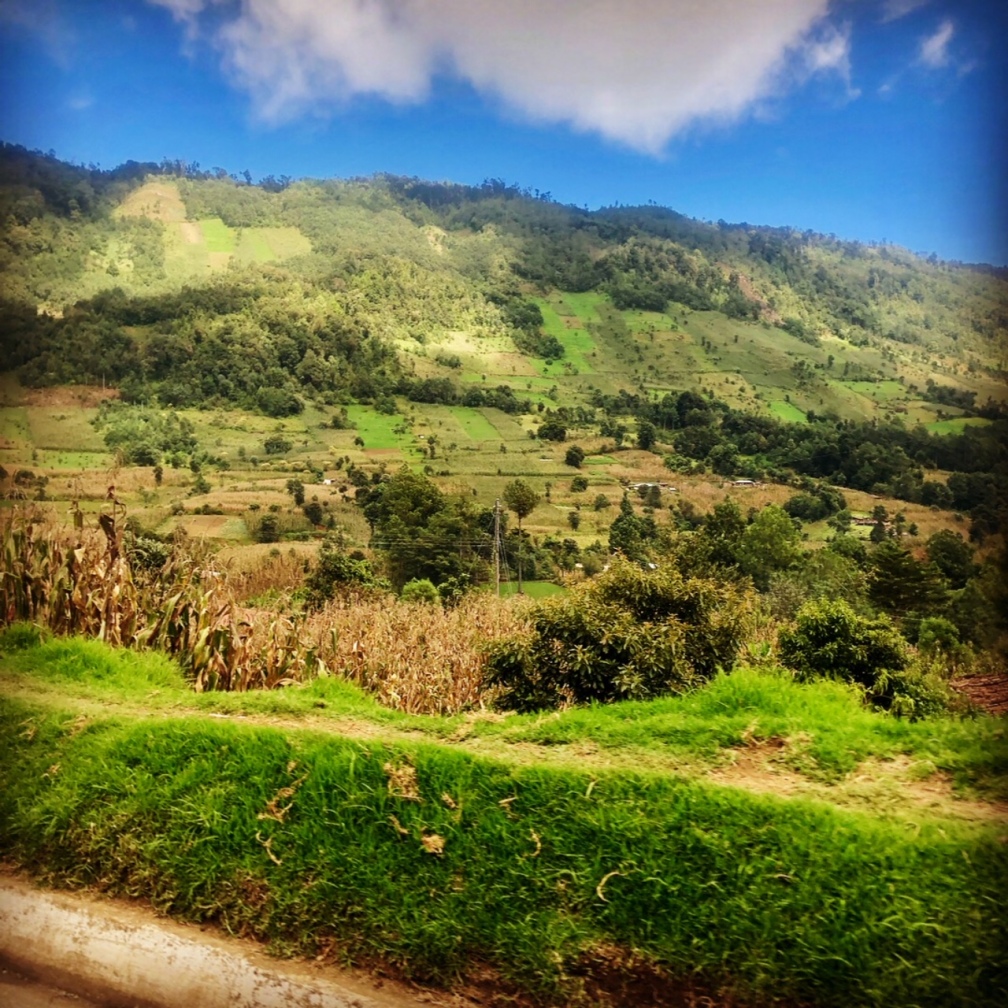 Mountain farming. Hard work anyway you look at it. 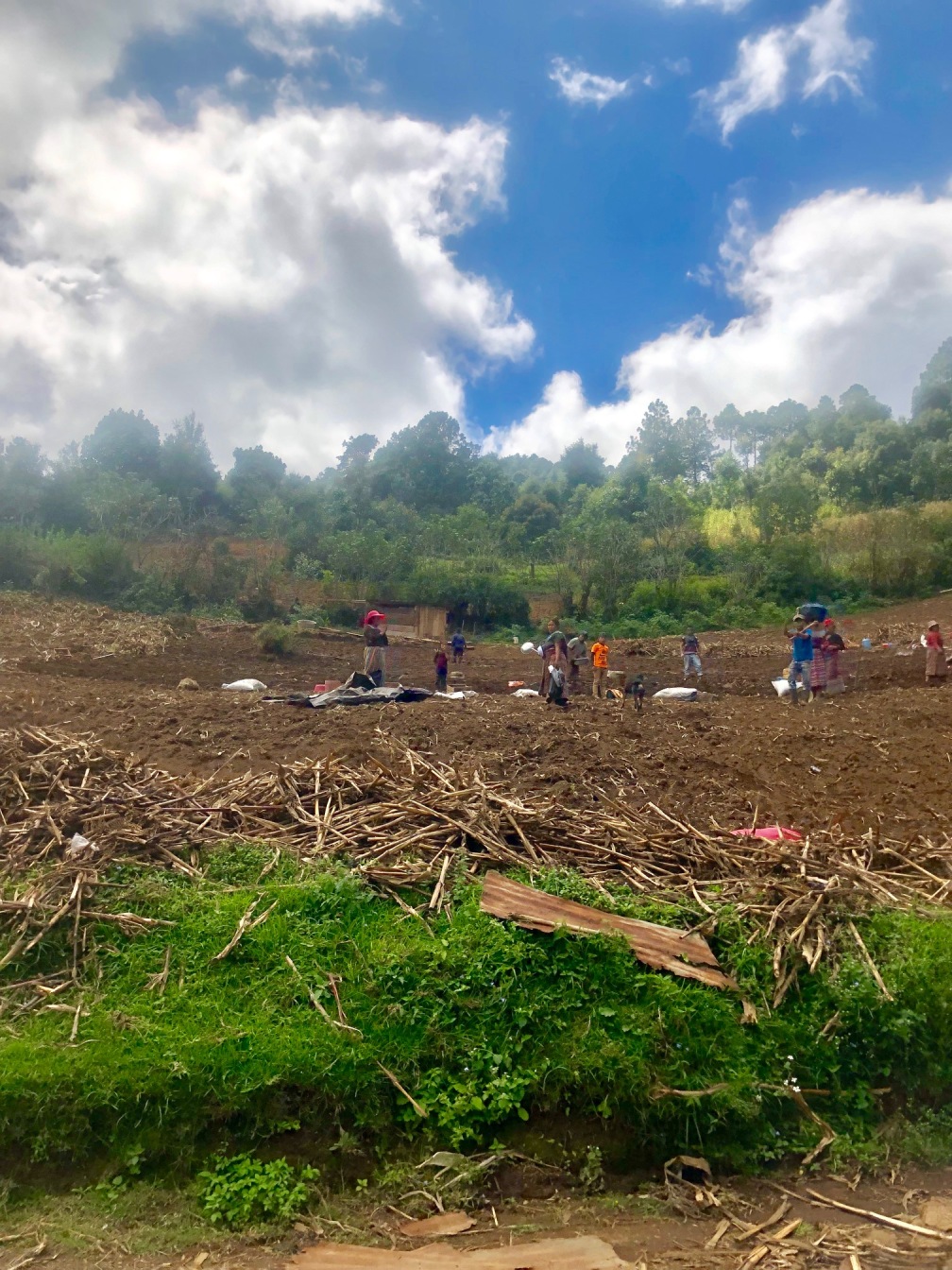 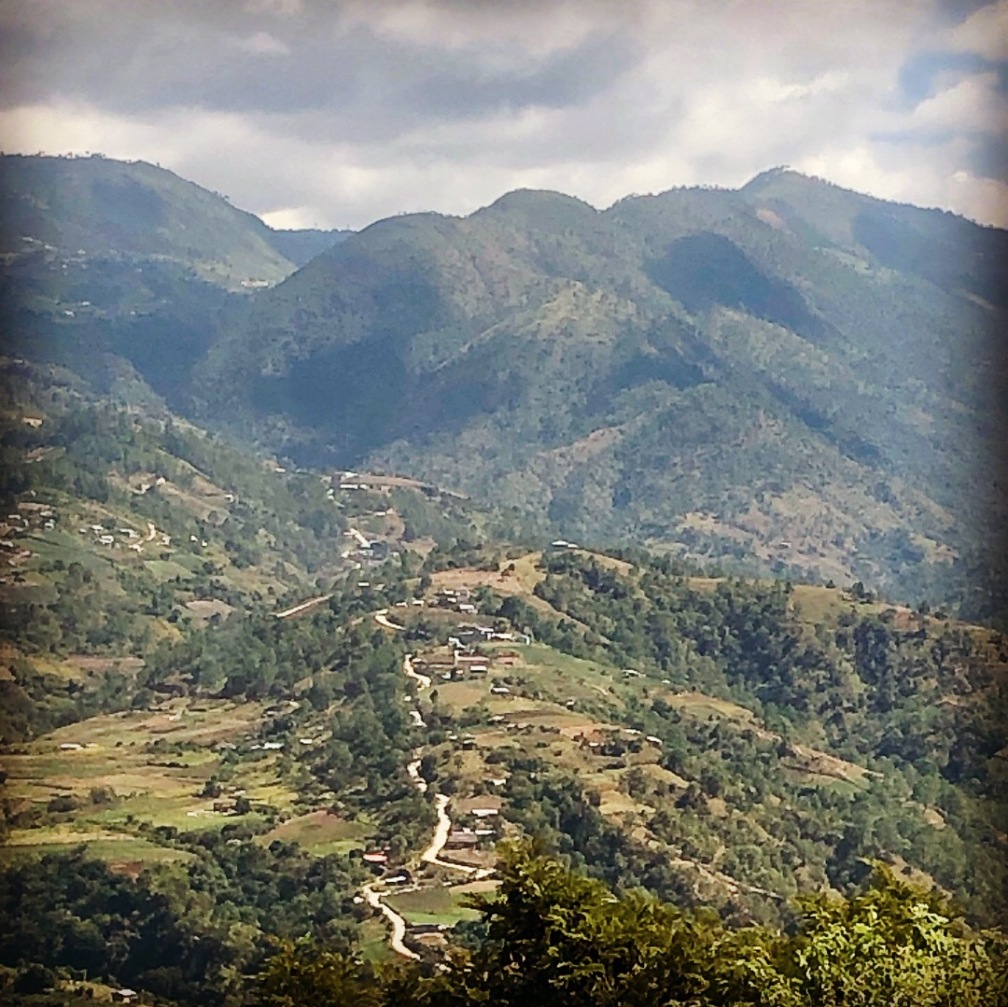 Long Road Home: 4 Countries 4,000 miles, 23 days, 2 motors and roughly 70 tanks of fuel, many, many smiles but none as pretty as the one I received when I arrived home. 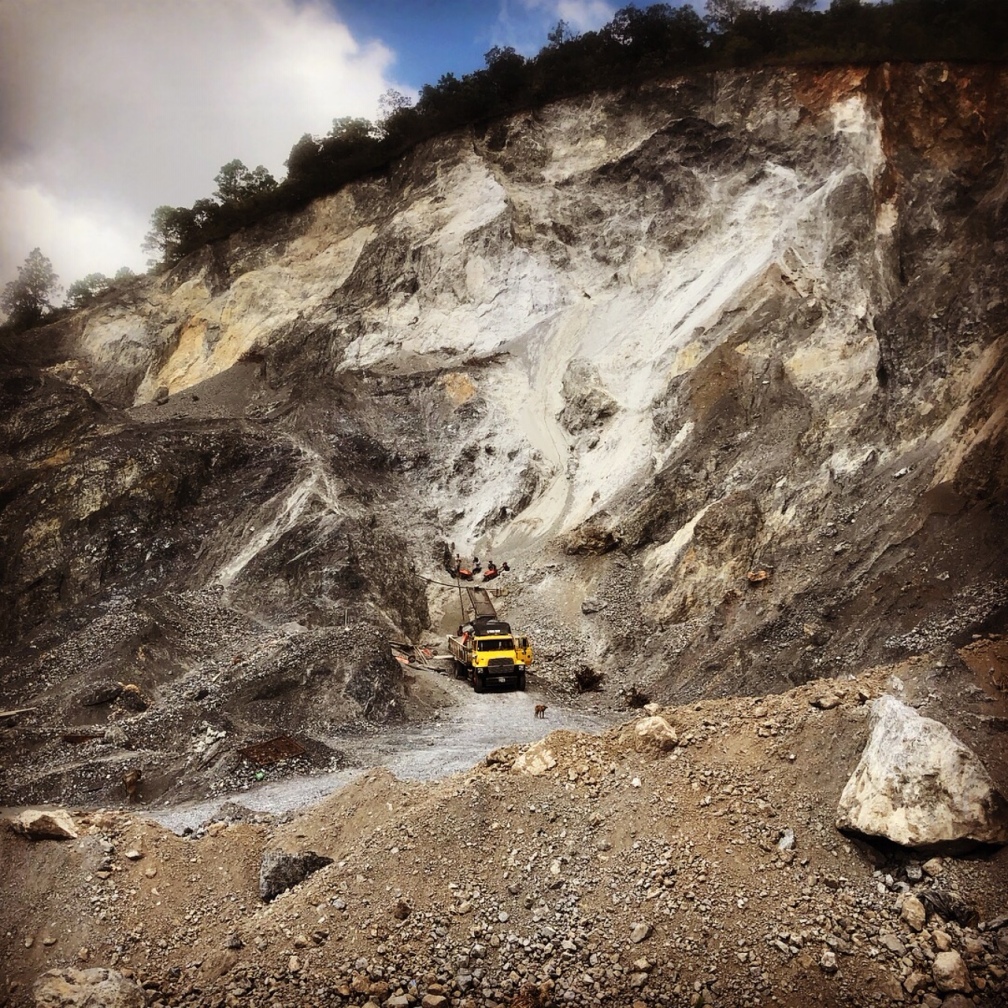 Other difficult ways we saw at making a living – breaking rock all day. 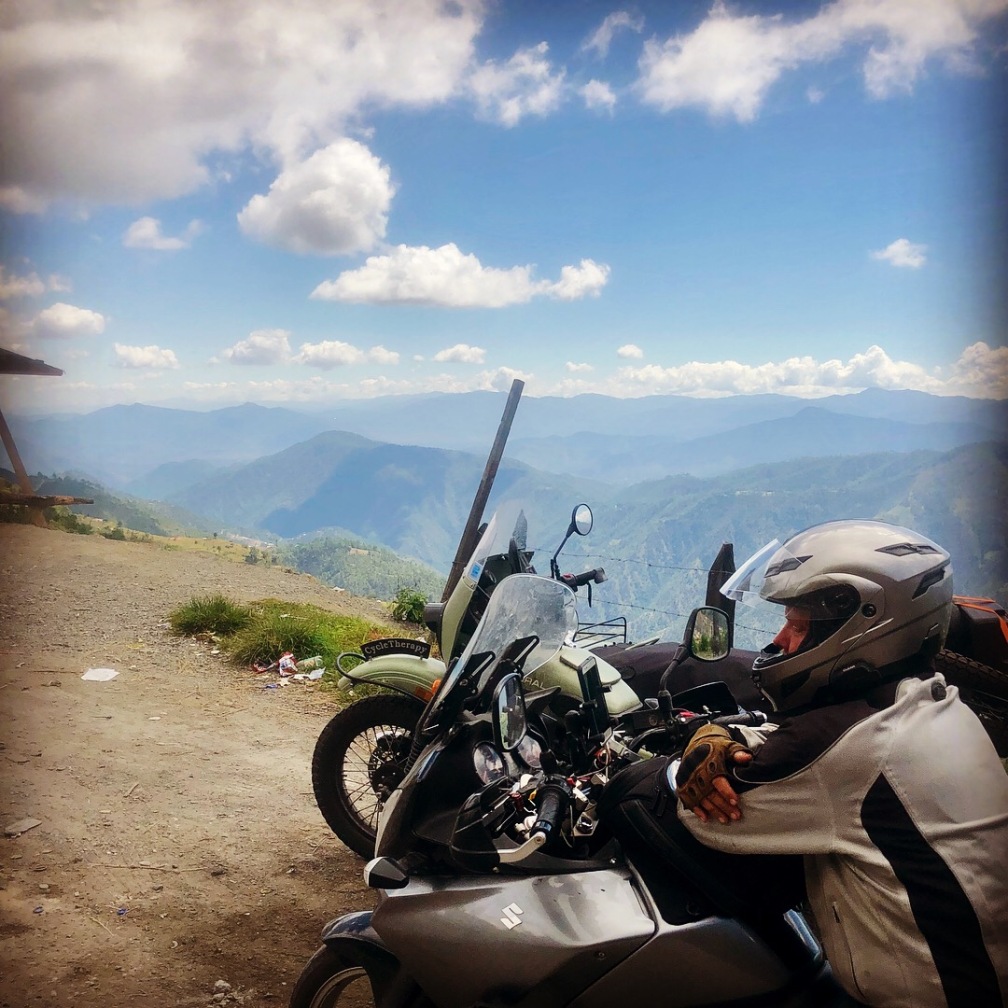 We were in the clouds on more than one occasion on this trip.

The next morning we found ourselves descending out of the mountains of Guatemala with more of the same beautifully majestic scenery shouting of God’s majesty. 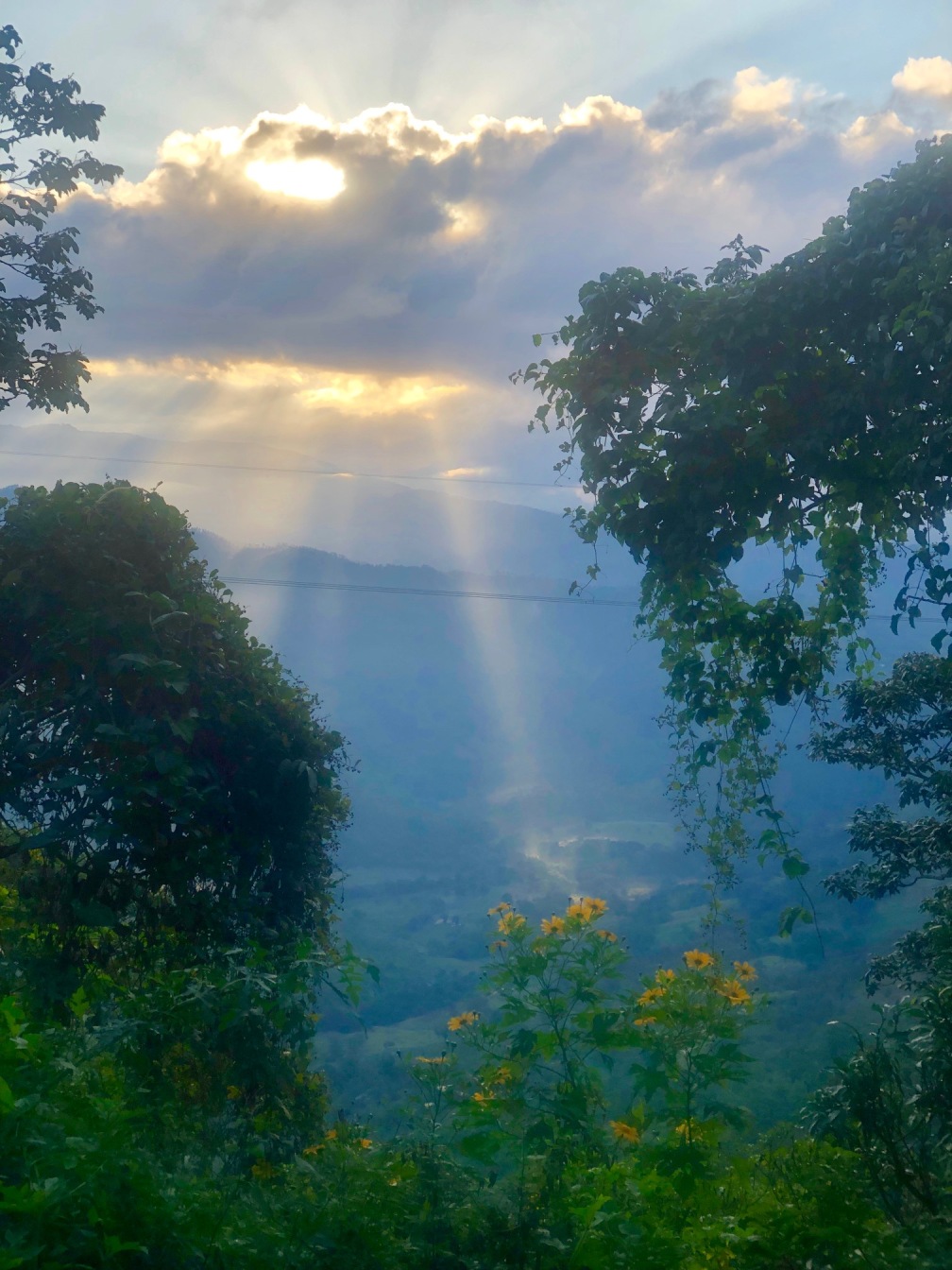 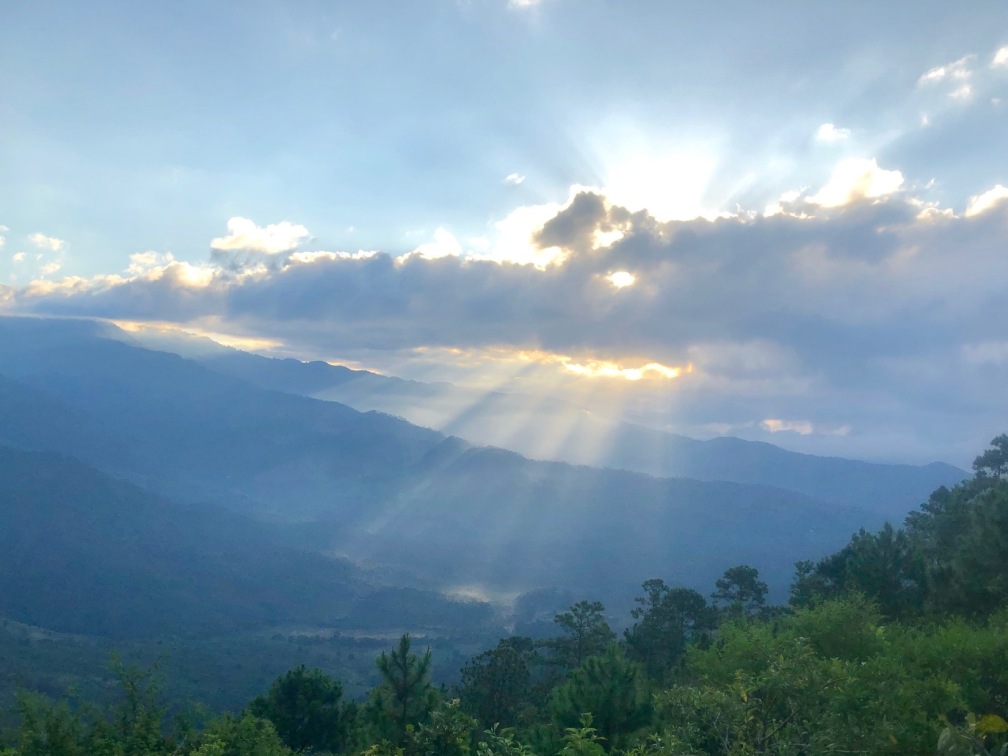 Keep in mind at every border crossing we had to “exit” with our vehicles that required additional securities and insurance.  We needed to verify all VIN numbers and receive a partial refund of monies then we need to go through that same process for the country you are “entering” it can be a several hour delay.  When we cleared the Honduran boarder at 2:30 pm I knew I could be home to Lisa by 8pm, with only three hours of night driving I knew we would be together again that night!!

Thank you to so many, for all that have lifted us in prayer during this journey, helping to keep us safe as many of those roads could have been a bad situation.  Thank you to Dale and Ron, for without you, this trip would not have happened when it did.  I thank my beautiful wife Lisa for being so understanding and supportive to allow me to take on this experience.  And most of all I thank my Lord and savior for guiding and directing my steps during this ride while continuing to stretch and grow my faith and bringing me to an awareness of my tendency to be a one man wolf pack, understanding that the only thing I can control is my attitude and outlook on any of life’s problems.  God is so full of grace and mercy that it has helped me to soften my heart, loving others as He has loved me and the way He has rescued me from the pit of dispair over and over again makes me want to help rescue others from the same fate.  My brother-in-law Patrick once asked me, “How much must you hate someone to not tell them about Jesus?” and that has really soaked in and has been a reminder to me that we are all called to share the gospel and to share the light that we have received when we first proclaimed Jesus as our Lord and savior.  Praying for you all to share your faith boldly, helping the lost to be found. Grateful I have found my way back, from the long road home.

God bless you all. 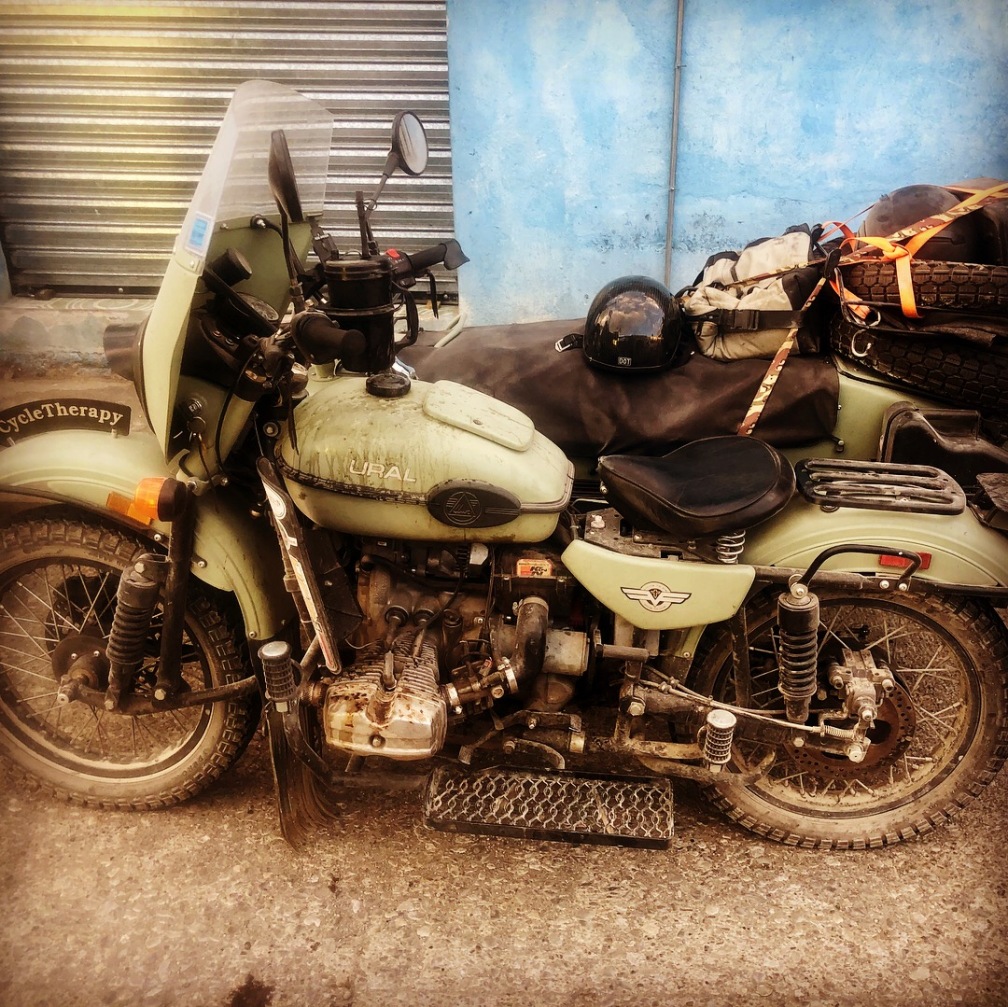 One fail (the engine), though it was a doozy, I think if I treat her right she’ll be good for years of service.